After the successful session in March 2017 and the publication of the draft of the Convention to prohibit nuclear weapons by the Chair Ambassador Elayne Whyte from Costa Rica, the Second round of negotiations on a Convention started on June 15th.

The sprit of the 125+ participating countries is productive and dynamic and no major disagreements have been stopping the hard works of the participants from going forward. Nuclear weapons States possessors and their allies, the countries who rely on nuclear weapons in their security doctrines, have chosen to boycott the process, except the Netherlands.

Indeed, the Dutch parliament voted in favour of the participation of the government after a strong campaign, which brought thousands of petitions to the Parliament. Any lessons to take out of this? 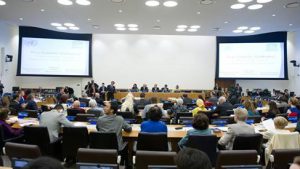 Civil society is also well represented with delegates from all over the world, coordinated by RCW and ICAN.  The Red Cross, and other humanitarian organisations are also contributing to the debates. This is something new in a UN process, especially when it comes to nuclear weapons: an interactive debate with contributions from civil society at all times.

Several member organisations from IPB are present and 2 delegates are covering the debates and organising the side events. 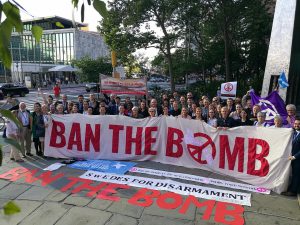 So far delegations supports and build off of each other’s suggestions, or engage in debate about the merits of particular proposals. The 2 first days addressed the preamble and the moving contributions from women, indigenous people and survivors pushed for a stronger language, as for example Karina Lester did – https://vimeo.com/221944177?ref=tw-share.

The revised preamble just issued today, is much better in this regard with a more clear language on human and environmental rights, and a critic on the slow pace of disarmament. The nuclear weapon ban treaty preamble also delegitimise nuclear weapons as an object and nuclear deterrence as a concept. The recognition and reflection of the horrific, discriminate, disproportionate impacts of these weapons on women and indigenous peoples will help achieve this objective. It is for humanity, and for our shared planet, that we ban nuclear weapons.

Saturday June 17th was the date of the Women’s March to ban the Bomb with events in many cities and countries and despite the rain http://www.womenbanthebomb.org/video, the New York March inaugurated a broad alliance of women from many backgrounds, social rights, environment, human rights etc… which is called to last. 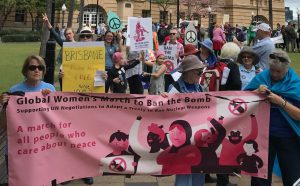 On Sunday, Peace and Planet network organised an International Forum “No Nukes, No Wars, No Walls, No Warming: One Struggle, Many Fronts” was truly exceptional. Each panel opened new and enlightening ground to stand on and look at future common mobilization toward a world free of nuclear weapons.

Thanks to Joe Friendly for the videos and to Joseph Gerson and the New York Team for this great event and inspiring talks that you can find here:

UN Ban Treaty and Beyond: https://youtu.be/GykkJtn48vQ 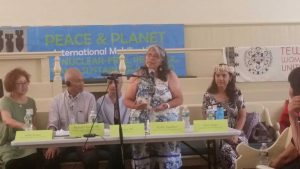 A great inspiring side event took place on Tuesday June 20th with Members of Parliaments from the UK, Nederlands and Germany, co-orgazied by IPB, PAX and Acronym Institute, with the support of the Rosa Luxembourg Foundation.

Members of parliaments MPs Jan van Aken, DIE LINKE (Germany), Caroline Lucas, Green Party of England and Wales (UK) and Sadet Karabulut, Socialistische Partij (Netherlands) – considered how to strengthen the work between parliaments and civil society toward the elimination of nuclear weapons. The Ban Treaty will be a major tool to break the “ideological addiction” to nukes, and beware the domino effect! Jan van Aken bets that in 3 to 7 years European countries will have ratified the Ban! 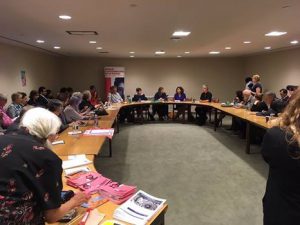