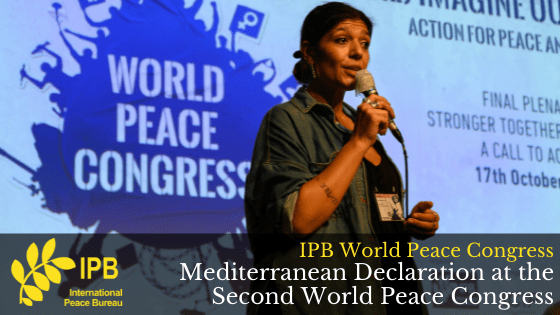 From the International Peace Congress, we feel committed to the rising global wave of civic activism and the powerful new generation of youth activists across the globe facing the global challenges. While here in Barcelona, we would like to take this opportunity to revisit the challenges in this Mediterranean Sea, observe the changes and encourage the action, support it, and call for more cooperation and human solidarity. We need as well to understand the interconnected causes of the conflicts in this area, as we pledge to achieve a peaceful transformation to all conflicts through our joint effort.

Countries around the Mediterranean are implementing national security policies instead of human security and human-centred solutions, with hidden power goals. In his letter to Freud dated July 30, 1932, Einstein stated that “The craving for power which characterizes the governing class in every nation is hostile to any limitation of the national sovereignty. This political power hunger is often supported by the activities of another group, whose aspirations are on purely mercenary, economic lines”.

The Mediterranean remains a conflicting set of nations, including the European fortress at the North and a group of crisis-affected countries in the South and East. The policies in the Mediterranean despise people, their dignity, and their rights, being a living example of the plundering and predation that the North exerts on the South. They lack human rights and justice, with a shameful treatment to which Europe subjects/conducts thousands of refugees who are forced to flee their homes.

Refugees’ crisis is intertwined with the climate emergency, the arms race, arms trade, and armed conflicts, in a context that benefits a few elite groups while abandoning the great majority of people of the area. Elites benefit from obsolete and useless militarised national security responses to entirely new challenges like environmental crisis and pandemics. Old responses that are useless because new global challenges ignore borders, requiring global, human-centred solutions.

Instead of a climate of violence, armed conflicts, and disregard for people’s rights, we propose a new ethical leadership in the framework of human security, people caring, and a culture of peace for social transformation. This new ethical leadership should transfer wealth from the North to the South of the Mediterranean to decrease disparity. We propose to create standard educational tools to promote acknowledgement around the Mediterranean region. We suggest fostering spaces of discussion, exchange, and mutual disclosure, not only among leaders and politicians but
mainly among the youth, NGOs, companies, women groups, scientists, journalists, and civil society to promote exchange while getting closer to the reality of “the other”, holding regular dialogue events for members of civil
society from around the Mediterranean region. We propose to prepare and sign specific agreements to decrease extractive activities, preventing resource-extracting activities in countries of the South of the Mediterranean that mainly benefit European companies. We propose to establish migration agreements based on the dignity and rights of all persons.

We ask the politicians to have a democratic and global vision to face the significant challenges that will affect the region and the entire planet, avoiding the influence of undemocratic lobbies and focusing on cooperation and the needs of all people, too:

We see demilitarization as an essential element for a world where all human rights can be respected and protected. Politicians in the Mediterranean region must look at ways conflicting rival interests could be peacefully resolved, creating trustful platforms to be the shared space. The region must become a free space for peaceful coexistence, tolerance, and dialogue.