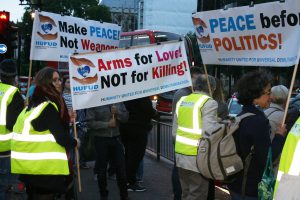 The 3rd pre-conference of the International Peace Bureau Youth Network (IPBYN) was held on September 15th at Rudolf Steiner House, in London, UK. The event was co-organized with Humanity United for Universal Demilitarisation (HUFUD), PeaceJam UK, and Corruption Watch UK.

The main purpose of the conference was to expose how decision-makers are highly involved in the arms trade and cooperating with the business of war. This was discussed through a variety of lectures and film screenings presented during the day.

Angelo Cardona, IPBYN member and HUFUD Director in Latin America, gave the lecture”The hidden shadow of wa” where he tackled the business of war and how it has impacted the implementation of the Peace Accord in his country, Colombia, and how it affects the advancement of peace in different regions of the world.

Cecilia Andrei, IPBYN member and PeaceJam volunteer, spoke about the concept of “Sustainable Peace”, noting that this term has only recently entered the UN language. She discussed the efforts of researchers and academics to empirically measure peace and the factors that can contribute to its sustainability, mentioning the Global Peace Index 2018 and the Positive Peace Index 2017.

The conference was followed by a Peace March through Westminster, including stops in Parliament Square and outside 10 Downing Street. HUFUD banners read slogans such as “Arms for Love, NOT for Killing!”, “Hold HANDS, Not GUNS” and “Make PEACE, Not Weapons”. 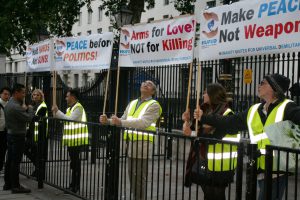