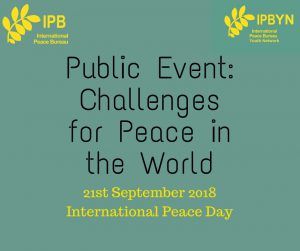 IPBYN, in collaboration with IPB and Scientists for Peace Germany (NatWiss), organised a public event on the topic of “Challenges and Positive Approaches to Peace” at Humboldt University on this year´s international day of peace.

All attendees of Friday´s session, the 21st of September, were able to listen to several lectures, given by experts and civil society stakeholders.

The introduction and greetings were given by Marie Cucur 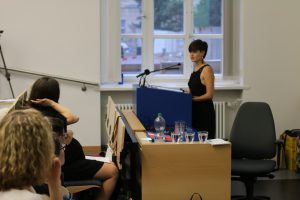 ella, an IBPYN representative, Amela Skiljan, the coordinator of the IPB Office in Berlin, Angelo Cardona, the IPBYN representative of South America, and finally Oliver Hasenkamp, representing the UN Association of Germany.

The event moved on, after the warm words of welcome and the emphasize on the importance to embrace this international day of peace, to the first lecture on the Israel Palestine relation given by Emma Pritchard. She had spent some time in this region through a programme of the Ecumenical Accompaniment Programme in Palestine and Israel (EAPPI). Prof. Dr. Jürgen Scheffran, who is currently lecturing at the Unive 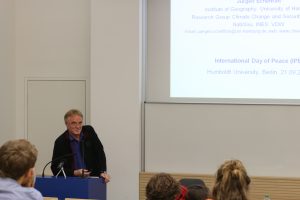 rsity of Hamburg, board member of Scientists for Peace Germany (NatWiss) and co-chair of the International Network of Engineers and Scientists for Global Responsibility (INES), held the second lecture. His expertise focuses on the interdependency of human action and climate. He elaborated on how the climate and conflict are interrelated through the intensification of scarce resources and conflict of interests and human migration. Anne Balzer, a member of ICAN Germany, gave the third presentation. ICAN, short for “International Campaign to Abolish Nuclear Weapons” is one of IPB´s collaboration partners on the abolition of nuclear weapons. Anne presented the current status on internationally ratified treaties and their respective shortcomings. Professor Mohssen Masserat, who was teaching at the University of Osnabrück, Germany, provided a rich insight on the implications of the Iran conflict. Some of the points discussed concerned the raison d’État of the United States of America to leave the Joint Comprehensive Plan of Action (JCPOA) which was previously under way with Iran, concerning the interim deal of Iran to downsize its nuclear program. Last but not least, Agata Stajer from the Youth Peace Ambassadors Network (YPAN) presented the audience with a talk about the “Positive Approaches to Peace”. During the last years Agata has engaged herself in human rights education in Poland and other countries. She told four stories of positive approaches to peace that individuals can implement, ranging from constructive and non-violent communication to participatory and non-formal human rights education.

An open panel debate with the speakers and the audience sparked a couple of thought-provoking questions were raised. This was the final point on the agenda and provided a good transition into the Friday evening. Presentations and videos of the event will be available at www.ipb-youthnetwork.org.

The Working Meeting on Saturday, 22nd September 2018, was a follow up event of the Public Event on Friday and served as a space for open discussions in the framework of topics that are related to IPBYN (such as youth, peace and security, social justice, disarmament, demilitarisation, climate, gender and nuclear weapons) as well as to the organisation of the 2019 World Youth Congress on Peacebuilding. The outcomes were also meant to be a resource for each participant to use in their individual actions and work and to share with their own networks within the peace movement.

Thanks to the different backgrounds and origins of the 16 participants, the contribution of ideas and experiences was wide ranging and allowed an international perspective. The participants from 10 different countries in America, Europe and Asia also had experiences in peace work in other parts of the world. Only a few of them were already active with IPBYN, while the rest of the group was not yet integrated in the Network. Consequently the exchange of experiences and stories regarding their work in the peace movement was perceived as fruitful and enriching. 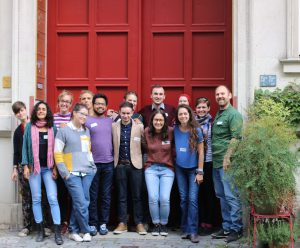 After a small introduction into the work of the International Peace Bureau and IPBYN and the exchange of experiences in peacebuilding actions, the program continued with a methodology of discussion groups.

The first working step included a brainstorm surrounding the question: In your view, what would be the most essential element that a peaceful world should include?. With the ideas coming up, the participants had the possibility to propose and vote for topics that should be discussed in smaller groups afterwards. In the second working step, they gathered in discussion groups lead by one moderator and had 45 minutes to discuss the question: Which steps would you take to turn this element into reality?. A range of 8 topics were covered in three slots of 45 minutes: Sustainability, Fair World Organization, Empathy and Non-Violence, Demilitarization and Security, Respecting the Dignity of every Human Life, Peace Education, The World as One System and the IPBYN World Congress 2019. The debates offered space for some more general and other more specific ideas of action for a development towards peace that each moderator presented afterwards to the whole group. Finally, the Working Meeting ended with an agreement on new guidelines and objectives for the future work of IPBYN and the process towards their international congress in 2019. These are the following:

The international congress will take place on the weekend of the international day of peace from 20-22 September 2019 in Berlin. Anybody wishing to participate in the preparation is more than welcome to do so by contacting the IPB Youth Network via info@ipb-youth-network.org. Further information may also be received by signing up for the newsletter on www.ipb-youthnetwork.org or by checking updates on the same website.