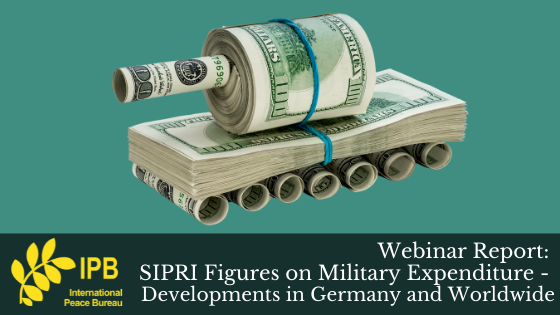 Distinguished SIPRI Fellow Tarja Cronberg first introduced main figures and summarized key trends based on the newly published data, reiterating that global superpowers are the main drivers of the global arms race. With the USA and China as the most prominent single actors in military spending, Germany, France and the UK have also considerably increased their military expenditure in 2020. While there may be multiple contributing factors to this development, Cronberg names rising tensions with Russia and the NATO-recommendation on military spending (2% of GDP) as two possible driving causes. While states like Myanmar, Romania and Hungary have also spent significantly more on their military budget due to their involvement in a latent or ongoing conflict, the Middle East region has seen an overall decrease in military spending of 6.5%.

Thomas Würdinger of the industrial workers’ union IG Metall then shed some light into the union’s activities to counter the industry’s and policymakers’ efforts to extend Germany’s role in militarization and the arms trade.  This includes the advocacy for stricter regulations of arms exports – especially to conflict regions – as well as the suspension of NATO’s 2%-recommendation. As part of the committee “Abrüsten statt Aufrüsten” (Disarmament Instead of Rearmament), the IG Metall supports the IPB’s standpoint that an increased military spending should be replaced with sustainable investments in a social and ecological transformation. To allow for this transformation, Würdinger further stressed the central role of a smart and worker-inclusive conversion of the arms industry on a European level.

Fridays for Future activist and BUND Youth board member Myriam Rapior then called for a more holistic and intergenerational perspective on disarmament and social transformation. Rather than comparing military expenses with estimated funds needed for financing programmes targeted to resolve the big social questions of our time, Rapior reiterated the urgency and sheer multiplicity of ecological crises we continue to contribute to through our current way of living. If we do not change our way of thinking, our consumerism, Rapior found, will continue to deprive other people of their livelihoods, with military resources used for border protectionism preventing them to lead a good life in geographical areas not affected by future crises. Rapior called for an entirely new concept of how we want to live together – societally and internationally – for a life worth living for everyone.

IPB Executive Director Reiner Braun then added his appeal to return to the concept of common security as an alternative to arms races in the name of individual security. He called for a fundamental system change in foreign policy – away from confrontation and towards cooperation. Braun further illustrated the sheer amount of the military expenditure by contrasting some of its specific aspects to much-needed services for overcoming the COVID-19-crisis. With one minute of military deterrence costing as much as 139.000 COVID-tests, the daily budget to keep nuclear weapons on alert equaling 200 Mio. vaccines and the annual costs of nuclear weapon covering the costs for hospitalization for 1.5 Mio. COVID-19-patients, he unambiguously exemplified the scope of projects which could be realized when prioritizing disarmament. He closed with impulses on how to re-invent the peace movement and form close bonds with a broad spectrum of actors engaged in advocating for- and developing sustainable solutions for the most pressing issues of our time.

This webinar was part of our actions in the GCOMS-campaign. Read more about it here: www.demilitarize.org