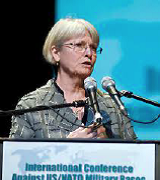 Annette Brownlie has been elected as board member of IPB in October 2022.

She has been very actively involved in the peace movement for over 40 years. She participated in the People for Nuclear Disarmament (PND), a movement which developed during the last nuclear threat peak in early 1980, as well as in the climate movement in the early 1990’s-1995. She has further been co-convener of Just Peace Qld from 2001-2015.

She serves as the Independent and Peaceful Australia Network Chairperson of IPAN since 2013, and on the coordinating committee of Just Peace Queensland. Annette is further a co-founder of the Pacific Peace Network.

In these roles she raises public awareness about alternatives to war and the necessity of justice in achieving lasting peace; speaks at public forums, advocates to governments, contributes to consultations and liaises with a large number of peace organisations. Recently Annette has overseen the IPAN-led People’s Inquiry: Exploring the costs and consequences of Australians involved in the US alliance and US-led wars.