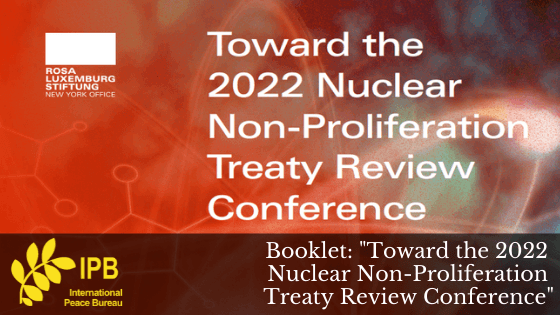 With nongovernmental organizations excluded from the United Nations due to the Covid pandemic, representatives of nuclear disarmament movements and analysts from across the world planned an online international conference for January 4, 2022, the opening day of the Nuclear Non-Proliferation Treaty (NPT) Review Conference. Given the urgency of the continuing nuclear dangers and the importance of building movements and informing policy makers and diplomats, when the Review Conference was again postponed by the pandemic, we forged ahead with a truly remarkable conference.

This resource has been developed with our partners at the Rosa Luxemburg Stiftung and the International Peace Bureau to make public the reports, analyses and proposals from our speakers and several others involved in the planning and execution of the conference. We hope that you will read it with interest, share it and take action based on what you read here.

As the diplomats prepare for the rescheduled Review Conference, now planned for August 2022, each of the nine nuclear weapons powers are upgrading and/or expanding their genocidal and omnicidal arsenals. In recent years, the Bulletin of the Atomic Scientists has repeatedly conveyed the urgency of the moment by setting the hands of their Doomsday Clock to 100 seconds to midnight—the closest to catastrophe since the earliest years of the Cold War. It is widely understood that an accident or miscalculation amidst provocative U.S. and Chinese military operations near Taiwan or in the South China Sea could, like the 1914 shots in Sarajevo, easily escalate to nuclear war. Much the same is true as U.S., NATO and Russian forces confront one another in Europe and as Indian and Pakistani forces compete for influence and control in Kashmir.

We delude ourselves with the belief that nuclear weapons have not been used since the unconscionably brutal 1945 atomic bombings of Hiroshima and Nagasaki. During wars and international crises, every nuclear weapons state has prepared and/or threatened to initiate nuclear war.

The Hibakusha, the tortured witness survivors of the Hiroshima and Nagasaki A-bombings and other nuclear weapons victims have long warned that “Human beings and nuclear weapons cannot coexist.”

For more than 50 years, the Nuclear Non-Proliferation Treaty (NPT), despite its faults—especially Article IV’s encouragement of nuclear power generation—has served as a bulwark preventing nuclear war and nuclear weapons proliferation. Yet the refusal of the initial nuclear weapons states to honor their Article VI obligation to engage in good faith negotiations for the complete elimination of their nuclear arsenals has severely undermined international respect for and the potential of the NPT. Add to this the flouting of the treaty as nuclear powers augment their first-strike or deterrent nuclear forces.

Joseph Rotblat, the Nobel Peace laureate and sole senior scientist to quit the Manhattan Project because of moral compunctions, warned that humanity faces a stark choice. It can either completely eliminate the world’s nuclear weapons or witness their global proliferation and the nuclear wars which will follow. No nation, he warned, will long tolerate what it perceives to be an unequal balance of terror. The insistence by the nuclear powers to maintain the nuclear apartheid system by resisting their Article VI commitments now drives pressures for proliferation from the Middle East to East Asia.

In desperation, and with hope, 122 countries negotiated and launched the Treaty on Prohibition of Nuclear Weapons (TPNW). At this writing 86 governments have signed the treaty and 57 have ratified it. As you will read here, nuclear weapons states claim that the TPNW undermines the NPT, but the truth is that it’s the nuclear powers’ refusal to fulfill their NPT obligations and the humanitarian consequences of nuclear war that led them to press the nuclear weapons states toward nuclear weapons abolition.
Preventing nuclear war and fulfilling the NPT’s promise of a nuclear weapons-free world can be done, but they depend on your actions.

Together for a nuclear weapons–free, peaceful, just and sustainable world.

Joseph Gerson, President, Campaign for Peace, Disarmament and Common Security, from the introductory essay “The Urgency of the Moment and the Imperative of Fulfilling the NPT’s Promise”