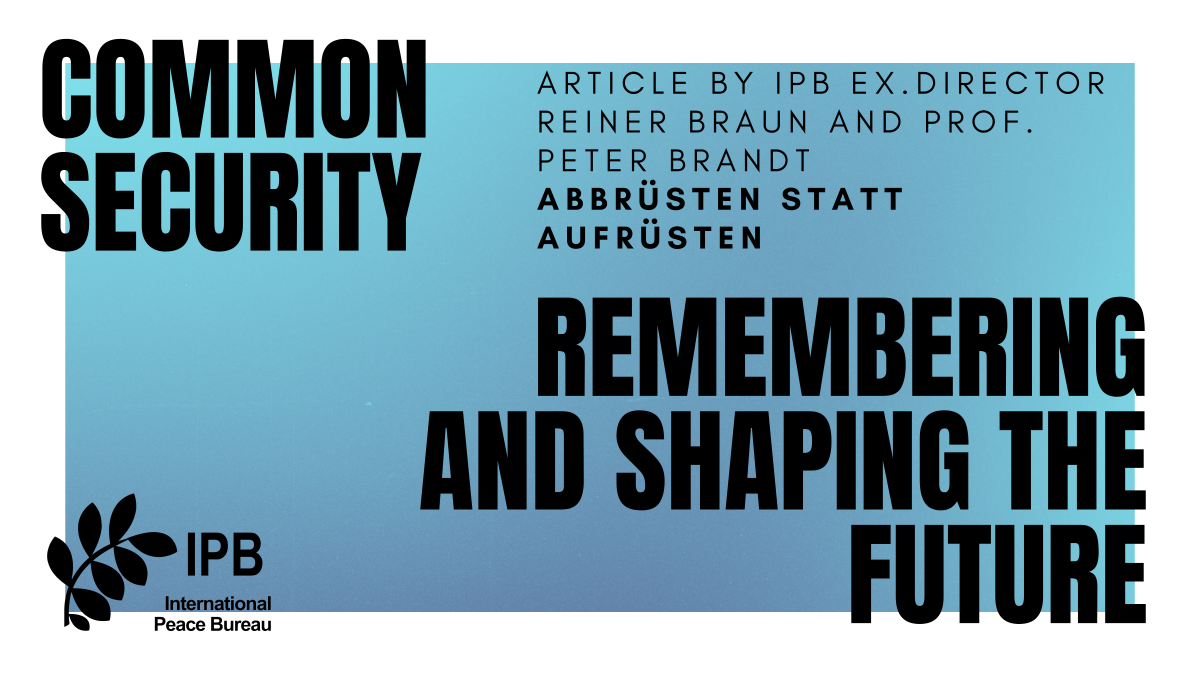 More and more people have the feeling that we are living in a time of intensified confrontations and even the possibility of a major war again. Uncertainty is increasingly shaping our daily lives as well. The statement of the scientific Nobel Prize winners: the clock is at 100 seconds to 12, is the concise expression of these dangers threatening us all, above all – in the longer term – the climate disaster, and directly the 14,000 nuclear weapons present on earth.

Is there an alternative to this that is socially and politically – nationally and internationally – capable of winning a majority, that helps to ensure survival and a better life? A strategy that combines historical experience with answers to current challenges? In the nuclear age, the sentence literally applies, as formulated by Willy Brandt, among others: “Peace is not everything, but everything without peace everything is nothing”!

This political concept is the policy of “common security” – it is conservative and revolutionary at the same time.

Conservative because it does not aim at changing the social systems and political orders of individual countries; it accepts socialism and capitalism, or however those in power characterize their system. It is recognized as existing and legitimately changeable only from within the different variants of authoritarian, liberal and welfare-state regulated capitalism as well as a democratic or authoritarian constitution of non-capitalist states. In this way, it creates the prerequisite for a peaceful competition between these systems in the first place.

It is revolutionary because it excludes war as the continuation of politics by other means, because it thus no longer permits this murderous method of conflict resolution, which has cost hundreds of millions of lives over millennia and has called into question the very existence of humanity for over 60 years, or, in other words, raises humanity and the planet to a new level of coexistence that would have elementary humanism as its basis.

The policy of common security can bring us closer to one of the great spaces of humanity: a world without war! How many generations have fought and suffered for it again and again courageously, often in vain and with great sacrifices.

Almost 40 years ago, common security was formulated as a concept by an international group of experts in the Olaf Palme Report “Common Security Blueprint for Survivals”; next year it will be updated with the participation of IPB and ITUC (World Trade Union Confederation).

What are the basic principles of this still current concept?

In the nuclear age, security cannot be created alone or against each other, but only together and in partnership.

War is no longer a means of politics in the nuclear age; all conflicts and controversies must be resolved peacefully, through dialogue and negotiation. Violent changes of borders, appropriation of territories are excluded; state sovereignty and supranational unions remain untouched.

Cooperation is the basis for peaceful coexistence; this must develop in steps and involve the development of trust. Cooperation encompasses all levels: Economy, ecology, science, culture and sport. Consultations at all levels and also joint crisis responses are part of it.

Human rights are respected, and their realization is also repeatedly called for in dialogical discussions – from all sides and in relation to all aspects of human rights. Civil and social. However, human rights are not an instrument for struggle in interstate disputes in order to label the other party as the “bad guy”.

Arms limitation and disarmament are indispensable. This always includes small initial steps of demilitarization, disarmament of troops and other confidence-building measures such as contacts between militaries. Openness and verifiability of measures are indispensable. Exclusive military alliances such as NATO must in the longer term either be demilitarized into existing inclusive networks and completely redesigned (as the OSCE was in Europe) or dissolved.

While the policy of common security was originally a Euro-Atlantic concept, it is now a global one and for this very reason must be increasingly regionalized. What is needed are very specific concepts for common security strategies for different regions of the world, not only for Europe but also, for example, for the Korean peninsula, for the Pacific and for the South China Sea.

The policy of détente of the 21st century is inconceivable – this is also a further development compared to approaches from the 1970s and 1980s – without the peace movement as one of the large, cross-border social movements and without an international civil society. They are the motor for a new policy of détente, driving these developments forward and safeguarding them against crises through comprehensive diplomacy from below.

The basic idea of the Olaf Palme Report is quite simple: My security is only guaranteed if the security of my counterpart is also guaranteed. There is security only in the “double pack”.

Disarmament – another lesson from the 1970s and 1980s – is the indispensable “materialization” of the policy of détente. That is why disarmament is absolutely central. It could be decisively advanced by unilateral calculated steps, especially by those in the stronger position. In the northern hemisphere, this would be NATO.