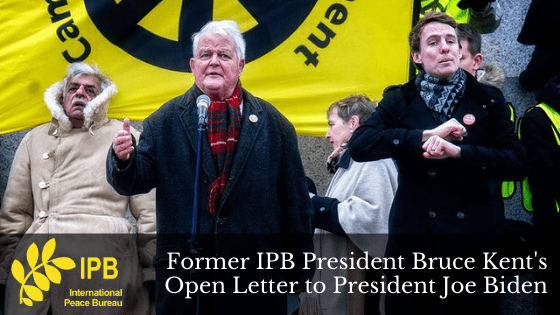 Following the inauguration of Joe Biden as the 46th president of the United States, former IPB Co-President Bruce Kent decided to write a letter to the new president reflecting his hopes and expectations for the administration. Read the full letter below:

This message comes, with my warmest congratulations and respects, as you take over as President of the United States.

Who am I?  A 91-year-old Englishman who was once a junior officer in our Royal Tank Regiment  and then spent nearly 30 years as an active Catholic parish priest and University Chaplain. I retired as a priest in 1987 and married in 1988.   For much of my life I have been deeply involved in work with various peace groups, in particular the Catholic organisation Pax Christi, the Campaign for Nuclear Disarmament and the International Peace Bureau.

The new UN treaty which came into force on 22nd January this year has made nuclear weapons illegal in about two thirds of the world.  Not that the message is a new one. The 1968 Non-Proliferation Treaty Article V1 obliges  the Parties ‘to pursue negotiations in good faith on effective measures relating to the cessation of the nuclear arms race at an early date and to nuclear disarmament….’ This has all been, at its best, a very slow process. I would like to suggest that the United States could easily take one immediate step which would accelerate it significantly.

As you will know, my country has a nuclear weapon system which it describes as ‘independent’. We are in fact spending at least £205 billion right now on another nuclear weapon generation— money which at this time would be much more usefully and sensibly spent on our National Health Service.

‘Independent’ these weapons will not be since we have to borrow, from the United States, the missiles on which to put our warheads.  It would considerably speed up the nuclear weapon elimination process if the United States ended the supply of these missiles to Britain.

National vanity is the real British reason for such expenditure. It was national vanity which started us on this road in the first place. Our Foreign Secretary in 1946, Ernest Bevin, then said, when calling for a British nuclear weapon…. ‘We’ve got to have the bloody Union Jack flying on top of it’.

Nuclear weapons bring no real peace to anyone.  The list of accidents involving nuclear weapons is a long and frightening one but little is ever said about them.  If you have time — which I doubt— get someone to bring you the September 1983 story about the courage of the Soviet Officer Stanislaus Petrov whose independent mind probably saved the world from disaster.

We need more such independent minds.

I wish you well with all your challenging responsibilities.

The warm wishes and prayers of many, including mine, are with you.