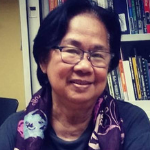 Corazon Valdez Fabros, elected Co-President of IPB in 2022, is a core member of thematic circle on Peace and Security both at the civil society process at Asia-Europe Peoples Forum and the ASEAN Civil Society Conference- ASEAN Peoples Forum.

She is Lead convenor of the STOP the War Coalition Philippines and Nuclear Free Pilipinas. Currently the focal person for the Philippines at the No Nukes Asia Forum (A network that focuses on campaigns against nuclear power plants in Asia and the promotion of alternative renewable energy sources as an option to dirty and destructive energy)

She sits in the board of the Association of Major Religious Superiors in the Philippines – Office of Women and Gender Concerns. She is Chairperson of the Peace Women Partners that convened the International Conference on Women, Peace and Security (ICWPS) in 2009 and 2016 and will convene the 3rd ICWPS in early 2023.

She was the former Chairperson of the Pacific Concerns Resource Centre (the Secretariat of the Nuclear Free and Independent Pacific Movement) and the Secretary General of the Nuclear Free Philippines Coalition (NFPC). The latter led the successful campaign to stop nuclear power plant projects in the Philippines. The NFPC was also the campaign centre for the rejection of a new military bases treaty with the United States that eventually led to the closure of US military bases in the Philippines in 1992.

She is a lawyer by profession and a founding member of the National Union of Peoples Lawyers and formerly with the Centro Escolar University Manila Faculty of Business Administration.