NATO foreign ministers will meet in Washington DC (USA) to mark the 70th anniversary of the alliance. As counteractions,  the network “No to War – No to NATO” will organise a series of parallel events in the city, starting on March 30. The final day of events, April 4, also marks 51 years since Martin Luther King, Jr. – who struggled against racism, poverty and war – was assassinated.

“Why? NATO is the largest military alliance in the world with the largest military spending and nuclear stockpiles. While claiming to “preserve peace,” NATO has violated international law and bombed Bosnia and Herzegovina, Kosovo, Serbia, Afghanistan, Pakistan, and Libya. NATO has exacerbated tensions with Russia and increased the risk of nuclear apocalypse.” 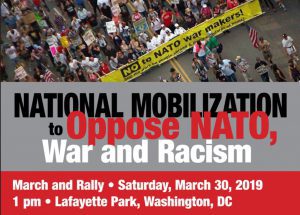