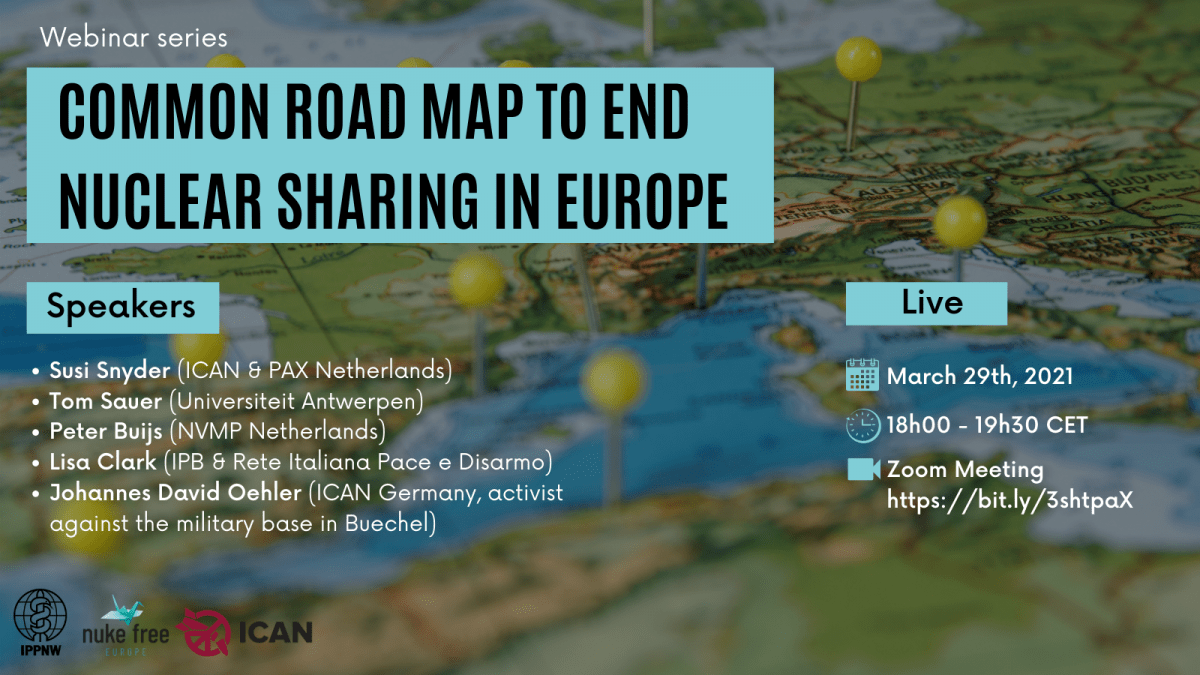 With the entry into force of the TPNW (Treaty on the Prohibition of Nuclear Weapons) the governments in European nuclear sharing countries, i.e. Belgium, Germany, Italy and the Netherlands, are confronted with a new reality: nuclear disarmament is now on the agenda in security politics.

This gives the peace movement in Europe an important chance to shape a new strategy to put pressure on European governments and NATO countries to rethink their dogma of nuclear sharing.

However, the European peace movement has not yet been able to realize the goal of a nuke-free Europe. It lacks a common road map with feasible steps of how to put an end to nuclear sharing. This is our opportunity: the percentage of people in favor of signing the TPNW has reached 75–80% in Europe. The worldwide ICAN – campaign for the TPNW is gaining momentum. Scientists’ and citizens’ constructive criticism on the expert group report of NATO 2030 will play an important role.

With several webinars on ending nuclear sharing in Europe, IPPNW Europe – together with ICAN-Europe and the Nuke Free Europe Campaign – aims to energize this discussion. We want to develop a common strategy for the affected European countries by creating a dialogue among peace activists, youth movements, churches, trade unions with scientists and parliamentarians.

Speakers: Tom Sauer (Universiteit Antwerpen), expert on nuclear arms control and international security questions, will give an overview including the situation in Belgium; further country reports will be given by Peter Buijs (NVMP Netherlands), Lisa Clark (International Peace Bureau & Rete Italiana Pace e Disarmo) and Johannes David Oehler (ICAN Germany, activist against th emilitary base in Buechel, aviation engineer). The discussion will be opened by Susi Snyder, expert from ICAN and PAX Netherlands.