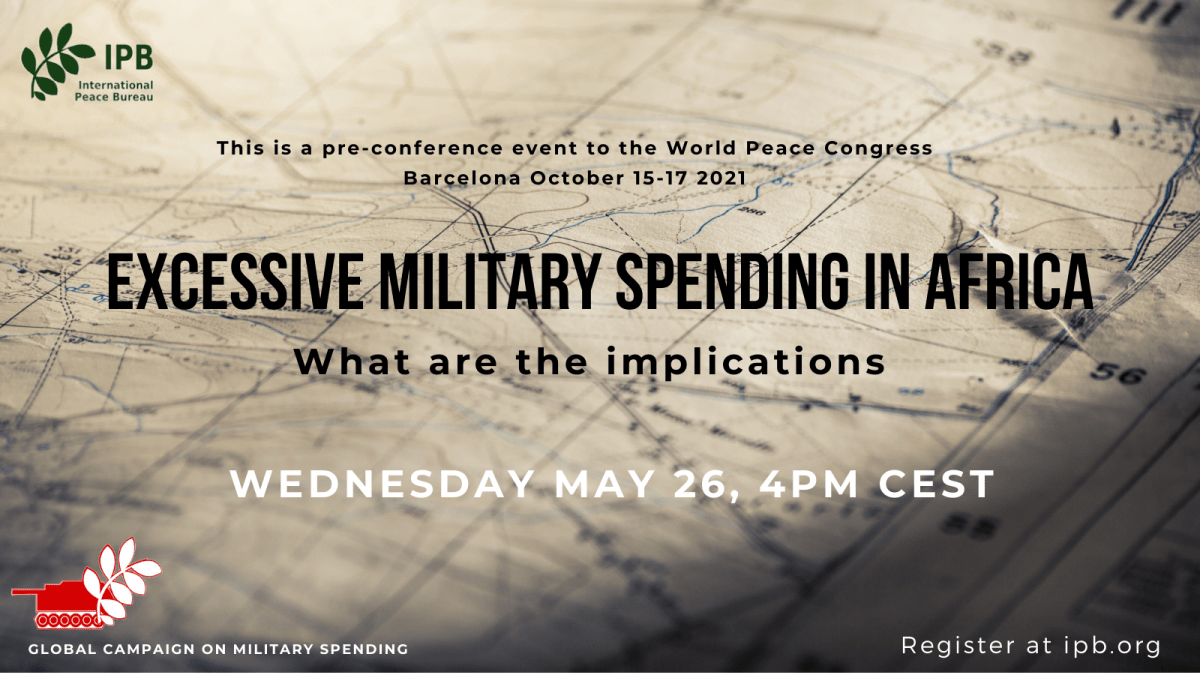 The International Peace Bureau’s Africa working group is excited to announce the latest webinar in its series. Further details to be announced shortly. Register here.

Africa, a continent that is dominated by developing countries spends so much on security and peace building in the sub-region. This phenomenon is necessitated by the prevalence of gross insecurity, chaos and anarchy in these countries. Notable among them are Nigeria, Burkina Faso, Niger, Sudan, Congo, Angola and Somalia.

Whilst militaries seek to protect territorial boundaries, fight external aggressors and sometimes maintain internal peace, equipping these forces comes at a great cost to the the people, environment and infrastructure their existence claims to protect. It is in this regard that it is imperative that we discuss the trends in military spending by African nations: are the financial costs justified by the losses, is the military really the best agency for seeking and keeping peace, how could the re-allocation of military budgets support development and peace? According to the Stockholm International Peace Research Institute (SIPRI) the combined military expenditure in Africa grew by 5,1% in 2020 compared to 2019, totaling US$43.2b. With such exorbitant levels of funding such as this being spent on militaries whilst war continues to rage, how can we not wonder whether this is really the most effective system of allocation. This is a conversation we must have.

Major General (Maj/Gen) Prince Charles Johnson, III, is an infantry officer in the Armed Forces of Liberia (AFL) who has served his country for over fourteen years and is currently serving as Chief of Staff (COS), AFL supervising the day to day operations of the Army (Budget)

Michael Amoadjah holds a Diploma in Youth Development Work and a B. A. Political Science all from University of Ghana, Legion. He currently holds the position of Chief Assistant Registrar of the Commission on Human Rights and Administrative Justice which oversees cases involving human rights violations, administrative justice violations and corruption related abuses. He is currently a member of Hohoe municipal child protection committee, a human rights activist , youth counsellor and a staunch member of Global Peace Association of Ghana.

Cyrille Rolande Bechon is an opinion leader and leader of the Cameroonian civil society. She is very active in the promotion, protection and defence of fundamental rights and freedoms. Through the NGO “Nouveaux Droits de l’Homme Cameroun”’ (NDH) which she joined in 2005, she is involved in all the struggles on civil and political rights, the fight against torture, ill treatment, access to criminal justice and public freedoms.

She is an expert, consultant and trainer in human rights for national and international institutions; she is a specialist in Transitional Justice and conflict analysis/transformation. She is holder of many university degrees including a Master’s degree in Human Rights, a diploma in Transitional Justice and a certificate of specialisation in conflict analysis/transformation.

Cyrille Rolande Bechon was awarded an honorary distinction by the Canadian Government in 2017, in recognition of her contribution to the promotion and protection of Human rights in Cameroon.

Opening remarks on military spending will be given by Quique Sánchez of the Global Campaign Against Military Spending (GDAMS).

Simultaneous French-English translation will be provided.