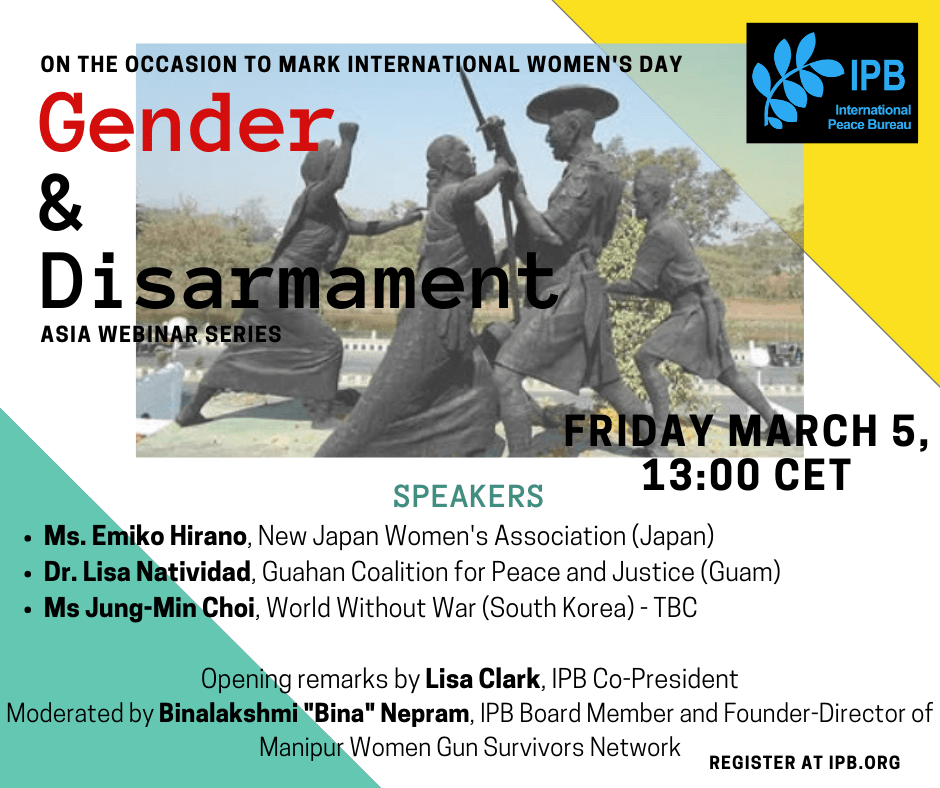 In order to mark the upcoming International Women’s Day, the IPB would like to introduce its webinar, “Gender and Disarmament”.

Panellists scheduled to speak are:

Emiko joined the anti-nuclear peace movement when she took part in the World Conference against Atomic & Hydrogen Bombs in 1984 for the first time as an international secretariat staff member. Struck and deeply touched by the Hibakusha’s testimonies, she committed herself to working for the elimination of nuclear weapons by making the best use of her language skill.
After graduating from the Tokyo University of Foreign Studies where she majored in Spanish and got involved in the solidarity movement with Asia, Africa and Latin America along with the nuclear abolition movement, she taught English at a private high school, engaged in family farming with her husband’s parents, and in 1998, she started to work full time at national office of the New Japan Women’s Association (Shinfujin). Shinfujin is a women’s non-governmental organization founded in 1962, whose mission is to achieve a nuclear-free and sustainable world, to promote rights women and children, and to build solidarity of women around the world for peace. It holds a special consultative status with the United Nations Economic and Social Council. Emiko takes charge of Shinfujin’s international work at UN, attending the UN Commission on the Status of Women, and other conferences and meetings related to gender equality and peace. Since November 2019, Emiko is assigned also to promote the peace campaign.

Lisa Linda Natividad is a Professor of Social Work at the University of Guam.  She is also the primary convener of the Guahan Coalition for Peace and Justice and a founding member of I Hagan Famalao’an Guahan.   She is an indigenous CHamoru who has championed the exposure of the human rights violations against her people and homeland Guahan, which is a military colony of the United States.  She has spoken globally on the topics of demilitarization, decolonization, and the critical role women play in the creation of safe and thriving communities.  Dr. Natividad has presented interventions on the halting of the massive military build-up on Guahan before the United Nations Fourth Committee, Decolonization Committee, and the Permanent Forum on Indigenous Issues.  She is a former member of the Guam Decolonization Commission and has spoken on these issues in Japan, the Philippines, the Untied States, Norway, Ecuador, Fiji, and other countries.

Jung Min Choi is the coordinator of nonviolence training at ‘World Without War’, a South Korean antimilitarists organisation based in Seoul that supports conscientious objectors and takes action against the arms trade. She also worked on the migrant women program at Durebang, a women’s rights organization in Gijichon in 2012-18.
World Without War is a pacifism and anti-militarism organization that works to eliminate various causes of war and war based on the belief that every war is a crime against humanity, and began its activities in 2003 with a group of conscientious objectors and their supporters. Currently, World Without War is expanding its activities through various peace campaigns such as arms trade monitoring campaigns and nonviolent programs in addition to conscientious objection.

Opening remarks will be given by IPB Co-President, Lisa Clark.
The event will be moderated by IPB board member and Founder-Director of the Manipur Women Gun Survivors Network,  Binalakshmi “Bina” Nepram.

“He recalled his mother’s last letter. ‘What would she feel,’ he wondered, ‘if she saw me here now, on this field, with cannon aimed at me?’ ~ Leo Tolstoy, War and Peace, 1865

For more than a century women and women’s organisations and movements have mobilised in support of peace and disarmament. There have been examples of women’s organisations and movements at the national, regional and international level with a primary focus on peace and disarmament. It is noted as early as in 1904 when women of Manipur fought using non-violent tactics against British Colonial Rule in First Women’s War and exploitative policies in and later in April 28, 1915 for the first time in history when nearly 1,200 women called “International Congress for Women” from warring and neutral countries came together to protest the conflict at The Hague in Holland.

During the Cold War, women lobbied against stockpiling and possible use of nuclear weapons. After a 1959 Conference on the “Responsibility of Women in the Atomic Age”, the newly formed “European Movement of Women Against Nuclear Disarmament” and other women’s groups, embarked on a massive educational and petition campaign. Around the world, in the Pacific region, women have organised against nuclear testing. For instance a group of women in Japan set up a peace camp at the base of Mount Fuji. Women’s groups in Africa have also been involved in advocating for peace and reconstruction as seen in Angola, Burundi, Somalia and Niger.

An individual’s decision to disarm is influenced by his/her/their perception of personal and economic security, an issue which is closely related to women. This makes disarmament a continuing process that is dependent on myriad factors such as the state’s ability to protect its citizens, crime levels, economic opportunities and the degree to which a weapon has become legitimate within society. A key to understanding why women have organisations in favour of disarmament is the link many women have made between gender equality and peace. The United Nations Security Council Resolution 1325 on women, peace and security was adopted in October 2000. This resolution specifically mentions the need to incorporate gender perspectives in disarmament, demobilisation and rehabilitation initiatives. This resolution was a monumental turning point in recognizing the concept of women’s direct contribution to Disarmament.

The webinar on 5 March is being organised by Asia Group of International Peace Bureau to mark International Women’s Day of 2021 and will be focusing on the sharing of important ongoing work done in this field. We look forward to having you with us.