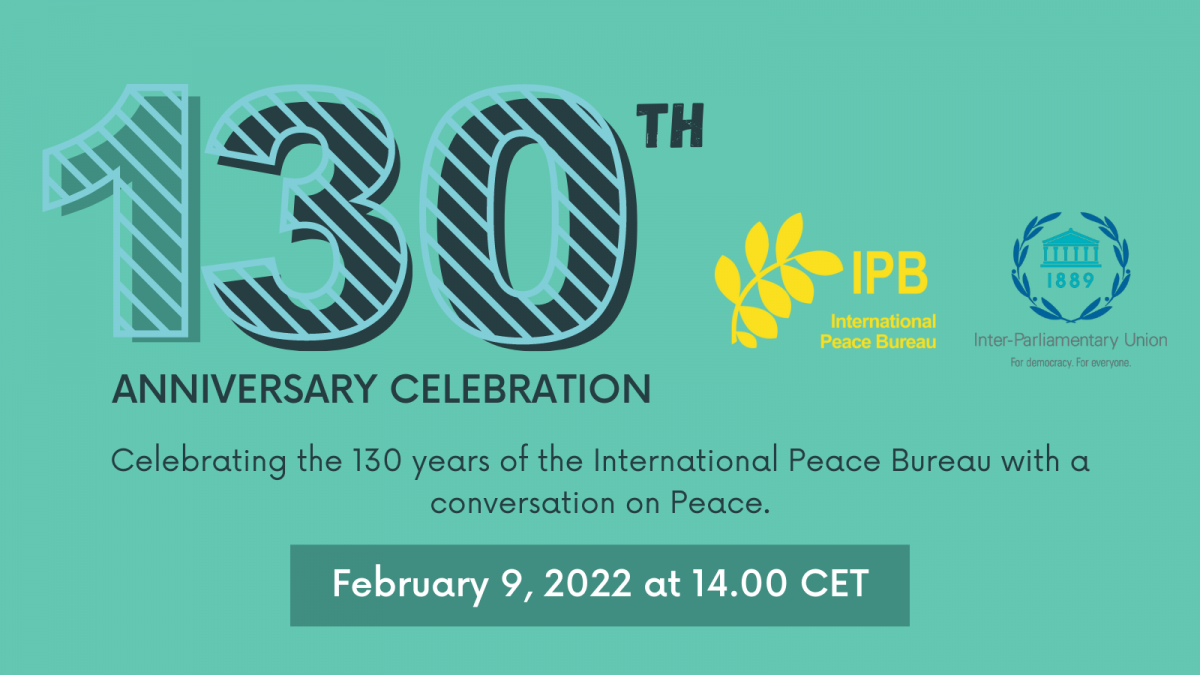 The IPU and the IPB were both established by the peace activists of the nineteenth century who were very aware of the fact that in the long run, the results of their efforts would depend on active involvement and cooperation worldwide. Some 130 years later, the world is at a historical crossroads on matters relating to peace, climate, disarmament, and security and the involvement of all is still needed to overcome these global challenges. The choices that lie ahead of us need to be educated by interactions between parliamentarians, youth, experts, and, most importantly, the people at local, regional, national, and international levels. Efforts to do so are carried out every day by the IPU and the IPB – two sister organizations working, in their own way, towards the same goals of peace, democracy, and a world without war.

To celebrate the 130th Anniversary of the International Peace Bureau, the IPB and the IPU are co-organizing a seminar to showcase the current work being done by both organizations on the issues of climate change, disarmament, democracy, and common security.  Echoing the IPB appeal released during the 2021 World Peace Congress and reviewing the outcomes of the recently concluded 143rd IPU Assembly – this event will discuss the global challenges and the threat they pose to peace and security around the world and gather a panel of experts and parliamentarians to give us their insights into the work of these organizations, as well as re-imagine what the future of peace will look like.

Objectives of the event

The event will feature speeches by Philip Jennings (IPB Co-President) and Bruce Kent (IPB Former President). The programme include video messages and greetings by Guy Ryder (Director general of the ILO), Sharan Burrow (General Secretary of the ITUC), Liv Tørres (Norwegian Federation of Trade Unions), Marc Finaud (Head of Arms Proliferation at Geneva Centre for Security Policy), Daniel Hogstra (ICAN), Ingeborg Breines (IPB Former President and Former director of the Women and a Culture of Peace Programme of UNESCO) and Magnus Løvold (ICRC). Speakers from the IPU to be confirmed. Moderation will be provided by Lisa Clark (IPB Co-President). As this event is a celebration of our work, videos and pictures from the history and actions of IPB will be presented. At the end, there will be a friendly space for exchanging experiences and a toast!

Please register under: https://zoom.us/meeting/register/tJYlc-ygrjMjHtyNK5vbNGrfw6qSXfPiUoJI. After you have completed the registration, you will receive a Zoom-link with which you can join the meeting.

The event will take place as an online webinar held in English with simultaneous interpretation in French.