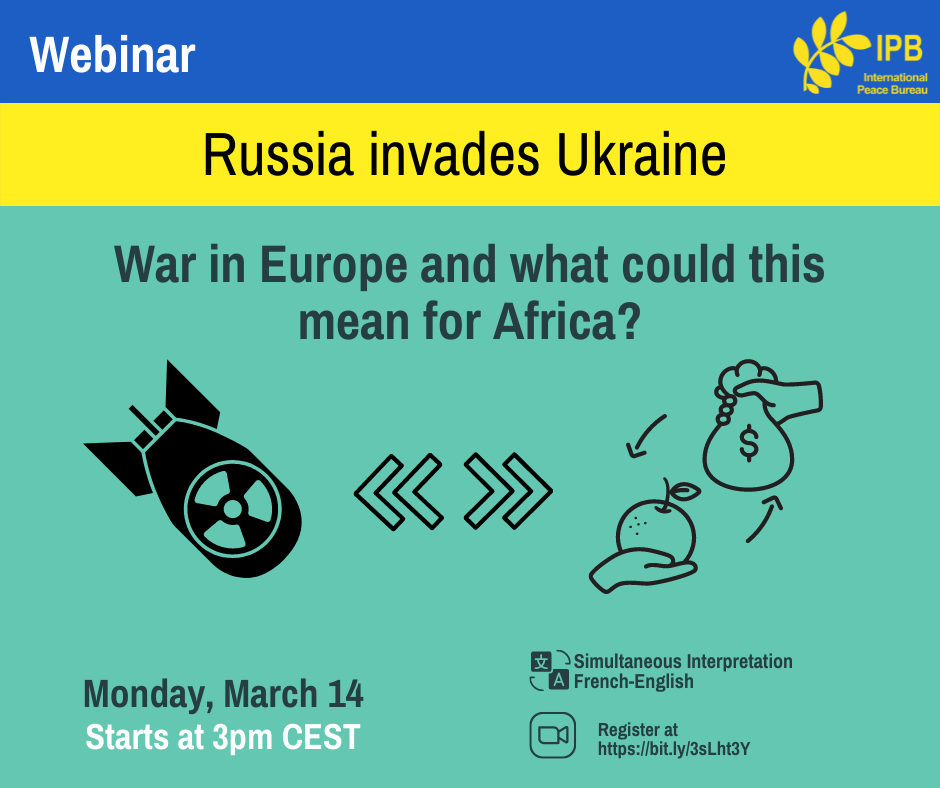 The international Peace Bureau’s (IPB) African Working group is pleased to facilitate a discussion on the unfolding crisis in Ukraine.

Ninety percent of European states are developed countries. Of its developing nations, Ukraine is first on the list. Africa is also composed of developing nations, its economic stability contingent on a stable world order. The impact on Africa from the Ukraine-Russia war is a highly complicated one with many factors still unknown. As the conflict unfolds and its implications on other regions become apparent, it is important that we begin this conversation now.

With many African nations already struggling to recover from the impacts of the Covid-19 pandemic and the worsening climate crisis, Africans are being driven deeper into poverty. An event such as the one currently underway and with the ability to shake even the most stable nations in Europe, will most definitely also have a reverberating effect on vulnerable states already in turmoil.

As in the rest of the world, Russia’s invasion of Ukraine which began on February 24, 2022 is already casting a long shadow across Africa. Despite the geographical distance, there are significant ties between Ukraine and Africa, including more than 8,000 Moroccans and 4,000 Nigerians studying in Ukraine and over $4billion in exports from Ukraine to Africa.

In the near term, it is already evident that the invasion of Ukraine will pose hardships for many average African households, hitting hard the agricultural sector and bringing food security once again to the surface of Africa’s immediate needs. In similar vein, the rising price of oil on the global markets induced by sanctions against President Putin’s administration will have direct impacts on the cost of transport and therefore many African’s daily mobility. And these are just some of the immediate effects.

Joseph Gerson is President of the Campaign for Peace, Disarmament and Common Security, Vice-President of the International Peace Bureau, Co-chair of the Committee for a Sane U.S.-China Policy, 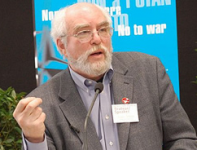 and Co-Convener of the international Peace and Planet Network. He has participated in Track II discussions about possible diplomatic solutions to prevent and then end the Ukraine War, has briefed Congressional staff, written articles and given numerous talks and interviews.  He educates and organizes at local,national, and international levels for peaceful and just alternatives to U.S. foreign and military policies, concentrating on great power tensions, nuclear weapons, the impacts of U.S. foreign military bases, and Pentagon spending.

Reiner Braun is Executive Director of the International Peace Bureau, a Peace Nobel Prize winner as organization, and one of the main speakers of 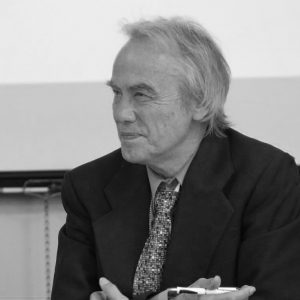 the peace movement in German. He lead the German chapter of The International Association of Lawyers against Nuclear Arms (IALANA), the Vereinigung Deutscher Wissenschaftler (VDW) — the German Pugwash group, Scientists for Peace and Sustainability and the International Network of Engineers and Scientists for Global Responsibility (INES). Reiner Braun is a speaker on the subjects of NATO, militarization of Europe, military spending, responsibility of scientists. He is author of several books, including “Einstein and Peace” and a biography of the Peace Nobel Laureate Joseph Rotblat.

Baroness Dayon Ako-Adounvo is the C.E.O of DIONE VENT INT. LTD a representative of Tensator Group (manufacturers of QMS) for Africa.

Founder of I.E.C.A – International Education Connect Agency (GO AFRICA brand) a Non-Profit organization with affiliates in the sub region to promote the need for subsidized living, skill training, capacity building and wealth creation for the students and youth in Africa. SWIFT AFRICA is another (Non-Profit) initiative recently created to enhance and foster unity amongst the youth and students of Africa and thus a channel to create, maintain and sustain Peace in the sub region.