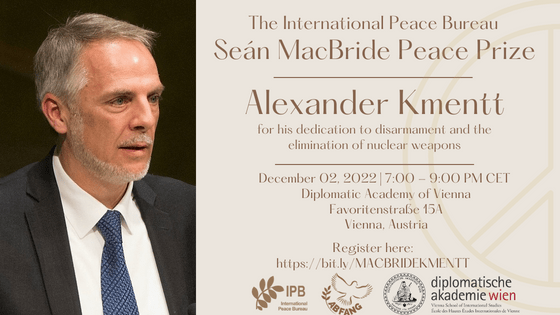 The International Peace Bureau has awarded Alexander Kmentt, Ambassador and Director of the Department of Disarmament, Arms-Control and Non-Proliferation Department of the Austrian Foreign Ministry with the Séan MacBride Peace Prize in 2021.

Mr Alexander Kmentt is the President of the First Meeting of States Parties to the Treaty on the Prohibition of Nuclear Weapons held in June 2022, a role he fulfils alongside his Directorship of the Department of Disarmament, Arms-Control and Non-Proliferation within the Austrian Ministry of Foreign Affairs. Mr Kmentt has a long career as advocate for a reduction in arms production, sale and use, especially nuclear weapons, bringing these issues to the highest levels of government and imploring decision makers to take notice and action. Mr Kmentt was one of the key architects to the TPNW. In 2014 he organized the Vienna Conference on the Humanitarian Impact of Nuclear Weapons which culminated in the Humanitarian Pledge which was endorsed by 135 States and played a significant role in the TPNW’s fruition. For these reasons, among others, the IPB board decided to award Mr Kmentt the Séan MacBride Peace Prize for 2021.

Emil Brix, Director of the Diplomatic Academy of Vienna

A light reception will be held for guests following the ceremony. The room has a capacity of approx. 80-100 people, therefore entrance will be permitted on a first come, first serve basis.

For guests unable to attend in person, the ceremony will be delivered in hybrid format using Zoom. Register here.

In addition, the ceremony will be live-streamed on the Facebook page of the Diplomatic Academy of Vienna. Please find it here.