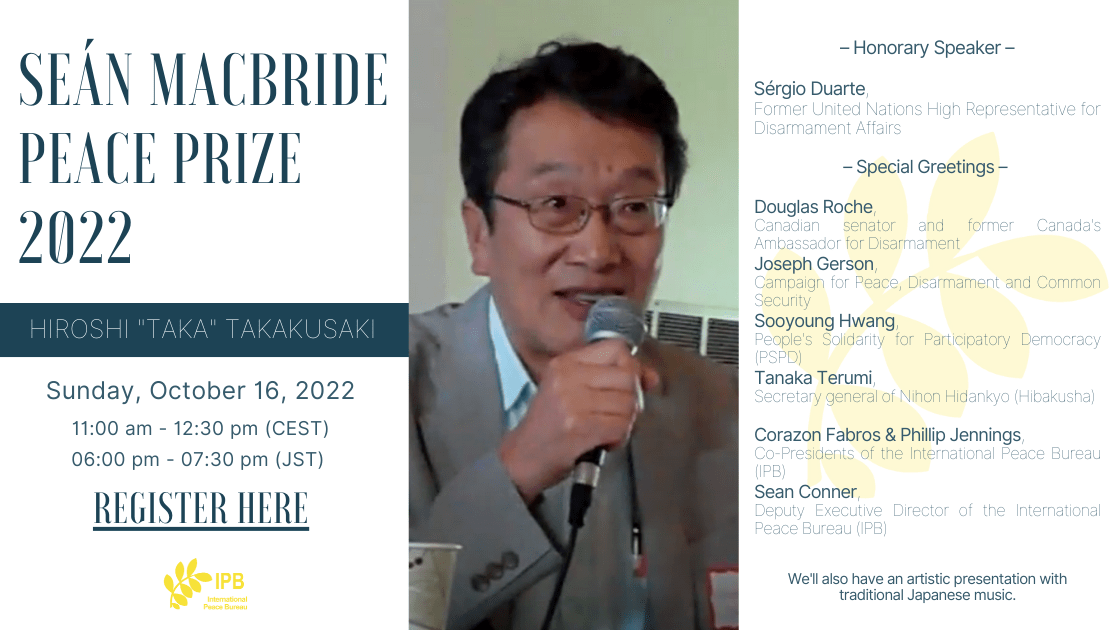 The International Peace Bureau has awarded Hiroshi “Taka” Takakusaki,  Representative Director of the Japan Council against Atomic and Hydrogen Bomb with the Séan MacBride Peace Prize in 2022.

He has been awarded the prize for his lifelong dedication to a just peace, the abolition of nuclear weapons and social justice. Hiroshi Takakusaki started his career by serving as a student and international youth movement leader and soon became involved in the Japan Council against Atomic and Hydrogen Bombs (Gensuikyo). Working in several positions for Gensuikyo, he provided the vision, strategic thinking and dedication that fuelled Japan’s nationwide nuclear abolition movement, the international campaign for the abolition of nuclear weapons, and Gensuikyo’s yearly World Conference. Regarding the latter, he played a leading role in bringing high-ranking United Nations officials, ambassadors and leading figures from the field of disarmament to participate in the conference. Apart from this, Hiroshi Takakusaki’s care and unstinting support for the Hibakusha as well as his ability to build unity within the social movement demonstrate his subtlety and leadership qualities. After four decades in service to the disarmament and social movements, he is presently the Representative Director of the Japan Council against Atomic and Hydrogen Bombs.

For the press release: https://www.ipb.org/ipb-statements/press-release-2022-macbride-peace-prize-recipients/

For guests unable to attend in person, the ceremony will be delivered in hybrid format using Zoom. Any details will be announced here soon.