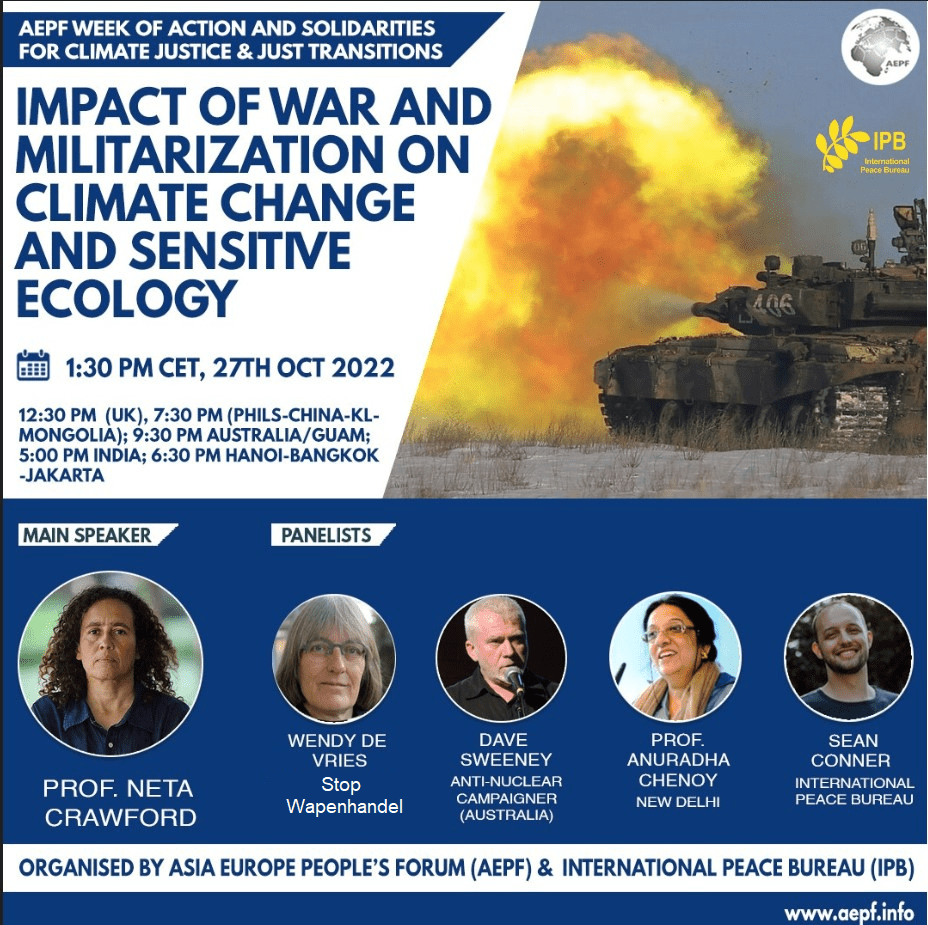 Wars, upgrading nuclear weapons, war games, military drills, exercises and
production have massive carbon footprint on land, the seas and sky. These
carbon emissions are not accounted for by countries since they prioritize security over climate. As we enter the New Cold War, military expenditures are increasing world over, and especially in the US where the proposed military budget is US $850 billion. This is accelerating global warming and damaging sensitive ecologies on land and sea.

This webinar calls for COP negotiations to take into account transparent
accounting of military carbon emissions and controls over ways that militarism and wars are damaging climate and the environment. We believe that Climate, social and peace movements work together to bring mass awareness on this disastrous securitization of the climate. The proposed UN Treaty that makes 30% of the seas protected zones should be endorsed.

Questions that may be relevant are:
– What impacts does war/militarization have on climate change?
– How is climate change affecting peace and security? Especially human security?
– By what way can various movements cooperate to promote inclusive actions in preventing war/conflicts?

Panelists:
Wendela de Vries is a long-time researcher and campaigner against arms trade and military industry at the independent peace organization Stop Wapenhandel, of which she is co-founder. She is part of the Steering
Group of the European Network Against Arms Trade and coordinates an international working group on arms, militarism, and climate justice.

Dave Sweeney is a prominent Australian anti-nuclear campaigner. He works for the Australian Conservation Foundation and acts an opinion writer and spokesperson on topics including uranium mining, nuclear waste, nuclear energy, nuclear weapons proliferation, nuclear
accidents and related indigenous rights issues. Sweeney has made appearances in or contributed to several documentary films which include discussion of nuclear issues.

Professor Anuradha Chenoy is the former dean at School of International Studies, Jawaharlal Nehru University, New Delhi. She has been chairperson of Area Studies Director in the Centre for Russian and Central Asian Studies. She has written many books, monographs and articles in the domain of security studies, development studies and gender studies. She has held short term consultancies with the International Committee of the Red Cross, UNESCO, Action Aid International, UN Women, UN Peace keepers. She has also evaluated the work of organisations like Focus on the Global South and the Asia Europe Peoples Forum.

Sean Conner
Executive Director of International Peace Bureau (ipb.org). He holds a Bachelors in Intercultural and Critical Communication Studies from the State University of New York at Geneseo and a Masters in Intercultural Conflict Management from the Alice Salomon Hochschule.
Prior to joining the IPB team in Berlin he worked for the Centre for Cross-Cultural Study (CC-CS) in the USA and in community development with the non-profit Enlace Project in Nicaragua. Sean brings his range of experiences to his peace work and activism, where he highlights the
importance of inter-sectional coalition building, intercultural and international exchange, and a strengthening of civil society.