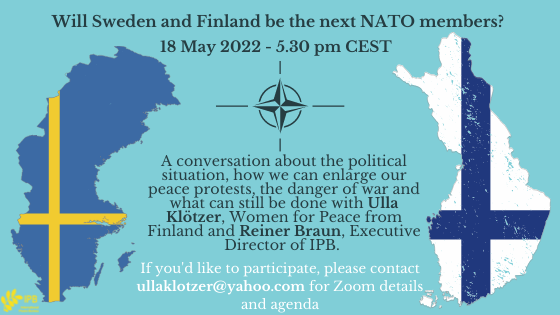 On April 22 a small group of peace advocates handed over to the Finnish Foreign Minister Pekka Haavisto (green party) a letter to the Finnish president, government and members of parliament asking the President to fulfill his earlier intention to host a new OSCE Summit in 2025. The letter also expressed the wish that Finland (and Sweden) should not apply for NATO membership before such a conference has taken place.

Russia would most certainly not attend a summit in Helsinki if Finland applies for NATO-membership.

After the audience it was clear to us that Finland does not intend to implement the plan for a new OSCE Summit. The following day, the Green delegation unanimously issued a positive statement on NATO membership and Minister Haavisto stated that Finland would work for peace and disarmament within NATO.

The same view – to influence NATO from the inside – was expressed May 3 by the minister for education,Li Andersson (Left Wing Alliance), the only party in the Finnish parliament that up till now has been at least somewhat skeptical to the membership.

It is quite obvious that Finland and Sweden will together apply for membership about mid May.

Many prominent persons from western countries have warned for the consequences – but their voices are not heard. The mainstream media fully supports the political elite. No democratic discussion is taken place.

We want to discuss the actual political situation and how we can enlarge our protests and opposition. We are facing the danger of a great war in Europe

Therefore we invite you to a zoom meeting May 18th at 5.30CEST.

WHAT CAN STILL BE DONE?

Should we push for an urgency OSCE summit to be held in Austria or Switzerland? How can we develop a stronger support for a policy of common security? How can we mobilize the public and counter more actively the pro NATO mainstream propaganda?

Please let us know if you will participate in the meeting so we can send you the zoom link and a more detailed agenda via ullaklotzer@yahoo.com.