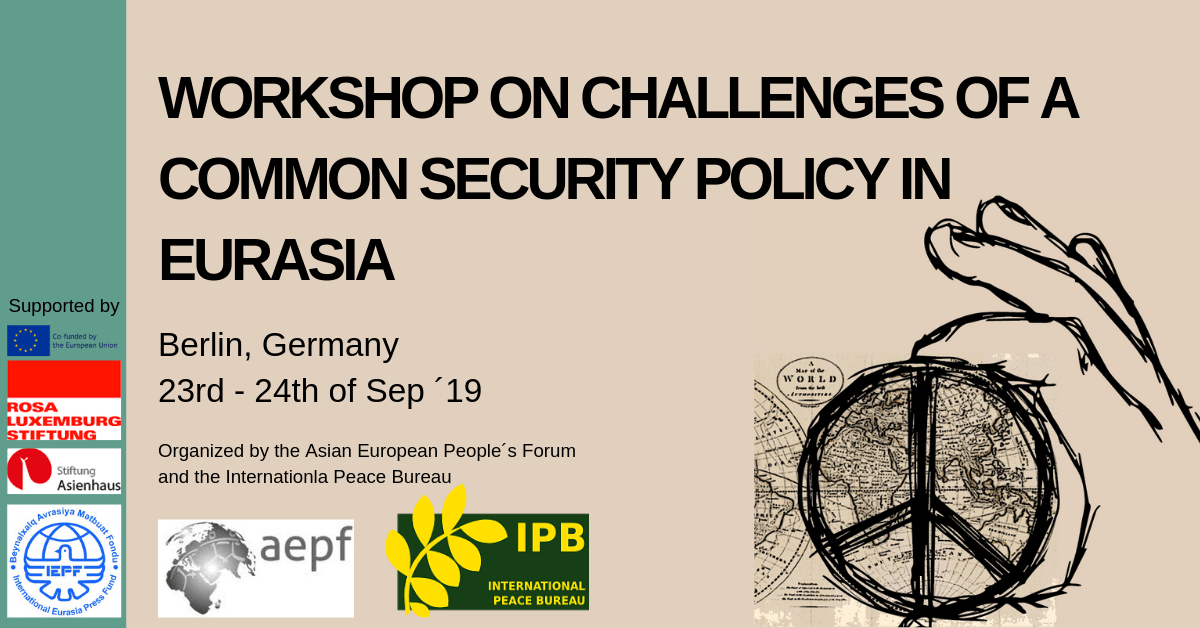 Workshop on “Challenges of a Common Security Policy in Eurasia”

With the support of the Rosa Luxemburg Stiftung, AsienHaus, the International Euroasian Press Fund and the European Union

Registration: To register for the workshop, send an email to info@ipb-of0ice.berlin

The “Peace and Security” Circle of the Asia- Europe People Forum (AEPF) is a critical part of the Forum that collectively understands, analyses, interprets and formulates alternative responses and actions on issues of peace, security, conflicts, threats and opportunities in Asia and Europe as envisioned by the people’s movements of this region.

Since 2016, the world has experienced major events which are likely to greatly affect the world’s order as well as peace and security. These events include: Brexit; Trump becoming the US President; the rise of aggressive xenophobic leadership in many countries that advocate and overlook violence in order to endorse their agendas; wars, conflicts and tension in regions as diverse as Ukraine, Libya, Syria, Palestine, the Korean Peninsula, South China Sea/West Philippine Sea/East Sea; the non-Resolution of many low intensity and frozen conflicts and the potential rise of ethnic and identity conflicts; etc. Besides, increasing military spending, foreign military bases, terrorism, internal conflicts, territorial disputes, militarization and the nuclear arms race, neo-racism, refugee crisis, oppression of minorities and xenophobic nationalism have been threatening people’s lives and peace and security.

A policy of confrontation, especially between NATO and Russia has increasingly prevailed in Europe. The nuclear weapons of all nations are being modernized.

On the other hand we can also observe positive steps towards peace, such as the incidents on the Korean Peninsula both between the US and North Korea as well as between both Korean nations.

But we should not forget – the continuous force and spread of the terror group calling itself the Islamic State (IS) and other terrorist movements have used violence as a way of threatening the world’s security.

In such a context, the Peace and Security Circle of the AEPF plans to coordinate with peace movements and people’s organizations; research and scholars in academic communities and institutions in Asia and Europe to organize various activities/ campaigns to create effective synergies in the struggle for peace and to find the better way to respond. The emergence of social movements that seek to find alternative solutions to recurring as well as new problems should be encouraged.

Currently, Southeast Asia faces continued difficulties in peace and human security in the effort of the world’s superpowers to maintain economic and political hegemony over our countries.

New alternatives for common security policy and –architecture in Europe and Asia are urgently needed. Those alternatives should take into account the positive experiences of the policy of détente from the 1970s and 80s. A Common Security Policy (also known as Collective Security Policy) should serve as the basis of this new security architecture.

The term originates from the title of the Palme-report “Common Security: A Blueprint for Survival“, which was the conclusion of the Independent Commission on Disarmament and Security Issues (“Palme Commission”, 1980-1982) presided by Sweden’s Prime Minister Olof Palme.

The key message of the study reads: “In the present time security cannot be achieved one-sided. We live in a world, which economic, political, cultural and in particular military structures are increasingly dependent of each other. The public safety of a nation cannot be bought at the expense of other nations.”

This security philosophy developed by Willi Brandt, Bruno Kreisky, Olaf Palme and others US based upon the principle: the security of a state can only be guaranteed if the security of the other (the opponent) is guaranteed as well. The key principles that de>ine this term of common security are “interdependence”, “joint responsibility” and “security for” instead of “security against.”

The International Peace Bureau is dedicated to the vision of a World Without War. Our current main programme centres on Disarmament for Sustainable Development and within this, our focus is mainly on the reallocation of military expenditure. We believe that by reducing funding for the military sector, significant amounts of money could be released for social projects, domestically or abroad, which could lead to the fulfillment of real human needs and the protection of the environment. At the same time, we support a range of disarmament campaigns and supply data on the economic dimensions of weapons and conflicts. Our campaigning work on nuclear disarmament began already in the 1980s.

The Asia-Europe People’s Forum (AEPF) is an interregional network of progressive civil society organizations across Asia and Europe. Since 1996, the AEPF has remained the only continuing network linking Asian and European NGOs and social movements. It has assumed the unique function of fostering people’s solidarity across the two regions and has become a vehicle for advancing the people’s voice within Asia-Europe relations.

Since its beginning, AEPF has provided a space for social actors in each region to: Strengthen network building at the national and regional levels in order to undertake cross-regional initiatives and campaigns;

Analyse issues of common interest such as security, development and neo-liberal globalization and their impact on peoples in each region and develop and take forward visions and strategies for alternative futures for a more just, equal and inclusive Asia and Europe;

Provide people’s organizations and networks with a channel for constructive engagement with the institutions and policies of ASEM-member countries.

Formal welcome: Introduction of AEPF, IPB, and the thematic cluster of Peace &

Security; Background and Rationale of this workshop on Common Security

1) What are the basic elements of a Common Security Policy?

2) How is the current security situation in Europe?

by Claudia Haydt (Board of the European Left, Germany) and Jordi Calvo (GCOMS, Spain)

3) How is the current Security Situation in Asia?

by Walden Bello (Focus on the Global South and Senior research fellow for Southeast Asian Studies of Kyoto University, Japan)

4) What are the current mechanisms to deal with peace and security?

15:00 – 18:00: Is the Common Security Policy a realistic/useful basis for the  security architecture in Eurasia?

Dinner on a boat & evening programme

How do we achieve a Eurasian Common Security Policy?

10:00 – 12:00: Introduction – What could be the core components of a common security policy for Eurasia?

13:00 – 14:45 Continuation of commentaries from different countries

1. What could be the core components of a Common Security Policy for Eurasia?

3. What is the role and responsibility of big and small countries?

4. Implementation and reaching of agreements

Implementation and reaching of agreements