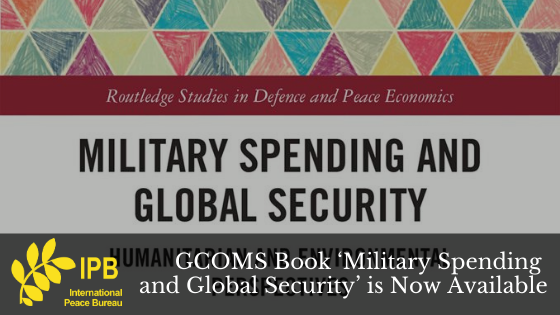 Authors argue that the increasing military spending is not a good response to emergencies that militarization itself has helped create and claim that it is in fact both a cause of and a response to serious challenges facing our society. The book also explains why people are not well-served by States continuously trying to compete with one another in terms of military strength, examines the scope of military expenditure around the world, and explains how militarism is linked to conflict and security threats and how military spending prevents us from adequately dealing with global environmental challenges.

After Tom Woodhouse‘s preface and Jordi Calvo‘s introduction, Aude Fleurant and Yannick Quéau give context to the book’s main topic with their chapter “Trends in global military expenditure: drivers of increases and causes of concerns”; Centre Delàs’ researcher Chloé Meulewaeter then analyzes the relationship between military expenditure, arms transfers and armed conflict, and Alejandro Pozo, also from Centre Delàs, examines “Military spending, foreign military operations and counter-terrorism”; Joseph Gerson then gives a perspective of the world’s biggest spender, the United States, in his chapter “Empire, US military spending and campaigning for a moral budget”; Laëtitia Sédou, Mark Akkerman and Bram Vranken, all members of the European Network Against Arms Trade -ENAAT-, incorporate a European perspective in their chapter “Militarisation of the European Union: fresh money for the military industry”; Tarja Cronberg and Dave Webb analyze the “Costs of nuclear weapons”; Pere Brunet and Chloé Meulewaeter examine the relationship between military spending and climate change; Finally, Colin Archer, former IPB Secretary General, studies the peace movement work in relation to military spending. Conclusions are again written by Jordi Calvo.

This book is a must-read for scholars, researchers and students from a wide range of disciplines as well as for professionals in the third sector and activists working on issues related to peace, security, militarism and social and climate justice.

The book will be presented on December 3, at a webinar on Military Spending and Global (In)Security, with Michael Klare, Walden Bello, Tarka Cronberg and Bina Nepram, moderated by Jordi Calvo and Dong Huy Cuong. You can finf more information about this online conference here.