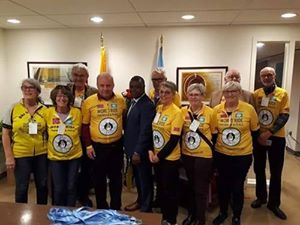 Our Norwegian member organisation Bike for Peace (BFP) has recently concluded its 2019 World Tour, which lasted 40 days and passed by the UK, France, India, China, Australia, New Zealand, the United States and Norway. According to BFP’s Olga Haugvaldstad, the tour was “an educational trip which inspired participants to continue their work for peace and friendship around the world”. Aged 64-77, the trip’s participants used the opportunity to call on younger generations to work with them for a more peaceful world and a better environment. Below is a brief overview of the tour’s highlights:

Nominated for the Nobel Peace Prize multiple times, Bike for Peace has promoted over 100 «bike rides for peace» since its establishment in 1978. Its Global Coordinator, Tore Naerland, is an active Board Member of IPB. BFP has plans for rides in Bosnia, England, USA, Russia, Armenia-Georgia, Pakistan-India in the near future (check their Facebook page for regular updates).