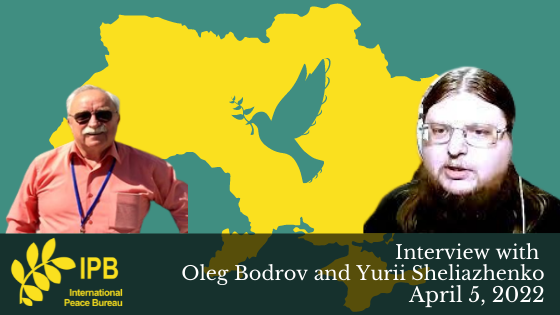 Can you shortly introduce yourself?

Oleg Bodrov: I am Oleg Bodrov, physicist, ecologist and Chairman of the Public Council of the Southern Shore of the Gulf of Finland, St. Petersburg. Environmental protection, nuclear safety and the promotion of peace have been the main directions of my work for the last 40 years. Today, I feel like a part of Ukraine: my wife is half Ukrainian; her father is from Mariupol. My friends and colleagues are ecologists from Kiev, Kharkiv, Dnipro, Konotop, Lviv. I am a climber, on the ascents I was connected by a safety rope with Anna P. from Kharkov. My father, a participant in the Second World War, was wounded in January 1945 and was treated in a hospital in Dnepropetrovsk.

Yurii Sheliazhenko: My name is Yurii Sheliazhenko, I am a peace researcher, educator and activist from Ukraine. My fields of expertise are conflict management, legal and political theory and history. Furthermore, I am executive secretary of the Ukrainian Pacifist Movement and member of the Board of the European Bureau for Conscientious Objection (EBCO) as well as World BEYOND War (WBW).

Can you please describe how you see the actual situation?

O.B.: The decision on the military operation against Ukraine was made by the President of Russia. At the same time, Russian citizens, judging by independent media reports, believed that war with Ukraine was impossible in principle!

Why did this happen? For the past eight years, anti-Ukrainian propaganda has been broadcast daily on all state channels of Russian television. They talked about the weakness and unpopularity of the presidents of Ukraine, the nationalists blocking rapprochement with Russia, Ukraine’s desire to join the EU and NATO. Ukraine is considered by the President of Russia as a territory historically part of the Russian Empire. The invasion of Ukraine, in addition to the death of thousands of people, has increased global negative risks. Military operations are conducted on the territory with nuclear power plants. The accidental hit of shells into nuclear power plants is more dangerous than the use of atomic weapons.

Y.S.: Illegal invasion of Russia to Ukraine is part of a long history of relations and hostilities between both nations, and also it is part of longstanding global conflict between the West and East. To understand it fully, we should remember colonialism, imperialism, cold war, “neoliberal” hegemony and the rise of wannabe illiberal hegemons.

Talking about Russia versus Ukraine, the crucial thing to understand about this obscene fight between archaic imperialist power and archaic nationalist regime is the outdated character of both political and militarist cultures: both have conscription and a system of military patriotic upbringing instead of civic education. That’s why war mongers on both sides call each other Nazis. Mentally, they still live in the world of USSR’s “Great Patriotic War” or “Ukrainian liberation movement” and believe that people should unite around their supreme commander to crush their existential enemy, these Hitler-ites or no-better Stalinists, in role of which they surprisingly see a neighbour people.

Are there any particularities in this dispute about which the Western public is not or not very well informed?

Y.S.: Yes, certainly. Ukrainian diaspora in America increased significantly after two world wars. U.S. and other Western intelligences during the cold war recruited agents in this diaspora to use nationalist sentiments for inciting separatism in USSR, and some ethnic Ukrainians became rich or made careers in U.S. and Canadian politics and army, in that way powerful Ukrainian lobby emerged with ties to Ukraine and interventionist ambitions. When the USSR fell and Ukraine gained independence, the Western diaspora actively participated in nation-building.

Are there activities against the war in Russia and if so, what do they look like?

O.B.: Anti-war actions were held in St. Petersburg, Moscow, and dozens of major Russian cities. Many thousands of people simply took to the streets to express their disagreement. The most popular category of participants is young people. More than 7,500 students, staff and graduates of Russia’s oldest Lomonosov Moscow University have signed a petition against the war. Students want to see themselves as part of a free democratic world, which they may be deprived of because of the isolationist policies of the president. The authorities claim that Russia has the resources necessary for life and atomic weapons that will protect them, even in conditions of separation, from the rest of the world. More than 1 million 220 thousand Russians signed the petition “NO TO WAR”. Single pickets “AGAINST NUCLEAR WEAPONS” and “AGAINST BLOODY WAR” are held daily in St. Petersburg and other Russian cities. At the same time, employees of the Institute of Atomic Energy named after Kurchatov in Moscow “fully supported the decision of the President of the Russian Federation to conduct a special military operation” on the territory of Ukraine. And this is not the only example of support for aggression. I and my colleagues in the environmental and peace movement are convinced that our future has been broken in Russia and Ukraine.

Is peace with Russia an issue in Ukraine right now?

Y.S.: Yes, this is an issue without any doubts. President Zelenskyy was elected in 2019 because of his promises to stop the war and negotiate peace, but he broke these promises and started to repress pro-Russian media and opposition in Ukraine, mobilizing the whole population to war with Russia. This coincided with NATO’s intensified military aid and nuclear drills. Putin launched his own nuclear drills and asked the West for security guarantees, first of all non-alignment of Ukraine. Instead of giving such guarantees, the West supported Ukraine’s military operation in Donbass where violations of ceasefire peaked and in the days prior to the Russian invasion civilians were killed and wounded almost every day on both sides, on government-controlled and non-government-controlled areas.

How big is the resistance against peace and nonviolent actions in your country?

O.B.: In Russia, all independent democratic media have been closed and ceased to operate. Propaganda of the war is being carried out on all channels of state television. Facebook and Instagram are blocked. Immediately after the start of the war, new laws were adopted against fakes and “against discrediting the Russian armed forces conducting a special operation in Ukraine.” Fakes are any publicly expressed opinions that contradict what is said in the official media. Penalties are provided from a large fine of several tens of thousands of rubles, to imprisonment for up to 15 years. The President announced a fight against “national traitors” who hinder the implementation of his Ukrainian plans. The Ministry of Justice of the Russian Federation continues to assign the status of “foreign agent” to environmental and human rights organizations cooperating with partners from other countries. Fear of repression is becoming an important factor of life in Russia.

How does democracy look like in Ukraine? Are they any parallels?

Y.S.:  On February 24, 2022 Putin started his brutal and illegal offensive aimed, as he says, at denazification and demilitarization of Ukraine. In result, both Russia and Ukraine seem to become more militarized and more and more resemble Nazis, and nobody is willing to change it. Ruling populist autocrats and their teams in both countries profit from war, their power strengthens and there are many opportunities for personal gain. Russian hawks benefit from international isolation of Russia since it means military mobilization and all public resources are now in their hands. In the West, the military production complex corrupted government and civil society, merchants of death profited a lot from military aid to Ukraine: Thales (supplier of Javelin missiles to Ukraine), Raytheon (supplier of Stinger missiles) and Lockheed Martin (distribution of jets) have experienced enormous increases in profit and stock market value.  And they want to gain more profits from killing and destruction.

What do you expect from the peace movements in the world and all peace loving people?

O.B.: It is necessary for the participants of the “Movement for Peace” to unite with environmentalists, human rights activists, anti-war, anti-nuclear and other peace-loving organizations. Conflicts should be resolved through negotiations, not war. PEACE is good for all of us!

What can a pacifist do for peace when his country is attacked?

Y.S.: Well, first of all a pacifist should remain a pacifist, continue to respond to violence with nonviolent thinking and actions. You should use all efforts to seek and support peaceful solutions, resist escalation, taking care about the safety of others and yourself. Dear friends, thank you for caring about the situation in Ukraine. Let’s build together a better world without armies and borders for the common peace and happiness of humankind.

The interview was conducted by Reiner Braun (by electronic means).