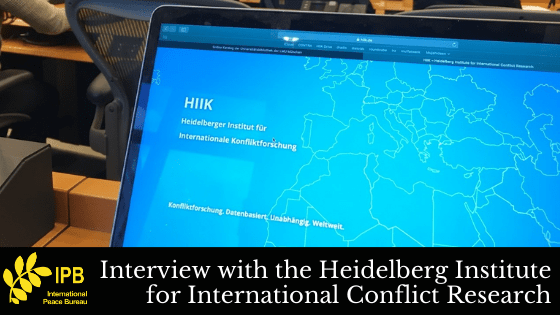 IPB Executive Director Reiner Braun sat down for an interview with members of the Heidelberg Institute for International Conflict Research to discuss about their work and main observations of the Conflict Barometer 2020.

Can you please present the Heidelberg Institute for International Conflict Research, its history, the structure, and the main research?

The Heidelberg Institute for International Conflict Research (HIIK) is an independent association dedicated to the monitoring of political conflicts worldwide. Founded as a research project in 1991 by Prof. Dr. Frank Pfetsch, today we consist of more than 200 researchers who observe such conflicts according to our methodology. Our researchers are organized in sub-regional groups, led by Regional Group Leaders (RGL) who themselves are organized in regional groups (for example the Americas or Sub-Saharan Africa). The association itself is headed by the Board of Directors. Our members are mostly students from a variety of academic disciplines. All our work, from researchers to the Board of Directors, is completely volunteer-based.

According to our methodology, a political conflict is a positional difference between at least two assertive and directly involved actors (for example governments, militias, or oppositional groups) regarding values relevant to a society (the conflict items like resources or subnational predominance) which is carried out using observable and interrelated conflict measures (actions taken by conflict actors) that lie outside established regulatory procedures and threaten core state functions, the international order, or hold the prospect of doing so.

We distinguish between five intensity levels of a conflict: disputes, non-violent crises, violent crises, limited wars, and wars. To determine the intensity of a conflict, we use both qualitative and quantitative indicators. These criteria comprise two dimensions: the means used to carry out violent conflict measures and the consequences of the use of force. The means dimension comprises the indicators use of weapons and personnel, while the consequences dimension includes the indicators fatalities, destruction, and refugees.

Our flagship publication is the Conflict Barometer (CoBa), an annual report in which we document our findings. For this, we gather sources, create conflict timelines, and write a descriptive conflict text for most of the conflicts we observe. Our texts go through several internal and external proofreading phases before they are published. Enclosed to the CoBa, we furthermore publish a data set that entails our data from the past years to make it comparative. Both the CoBa and the data set are freely available to the public and can be downloaded from our website.

What are the main observations of the Conflict Barometer 2020?

In 2020, HIIK observed 359 conflicts around the world, of which 220 were fought violently and 139 without violence. In comparison to 2019, the number of recorded wars increased significantly – from 15 to 21. This was the highest recorded number since 2014. Among others, the secessionist conflict over South Yemen, the confrontations over the Nagorno-Karabakh region as well as conflicts between Islamist groups and governments in the Democratic Republic of the Congo (DRC) and Mozambique escalated. Besides intra-state wars in South Sudan and Ethiopia, the conflict over the Tigray region added to the number of wars.

In contrast to 2019, Sub-Saharan Africa (SSA) was the region with the highest number of reported wars. In total, eleven wars were observed in the Sahel region, the DRC, Ethiopia, Mozambique, Somalia, South Sudan, and Nigeria, of which five wars are new ones. None of last year’s wars de-escalated. In West Asia, North Africa, and Afghanistan (WANA), this number decreased from eight to seven whereas the number of limited wars declined to one. Here, the conflict over the Sinai Peninsula was downgraded to a limited war. In the Americas, the drug cartel conflict in Brazil remained on the intensity level of a war, while the cartel conflict in Mexico was set to a limited war. While the limited war between the Colombian government and the respective cartels de-escalated to a violent crisis, the conflict over subnational predominance between the National Liberation Army (ELN) and the government was observed as a limited war. In Asia and Oceania, as in previous years, HIIK did not observe any wars, however, the number of limited wars slightly decreased from five to four. While the conflict between India and Pakistan, the independence conflict over Papua in Indonesia, and the secessionist conflict over the autonomous Bangsamoro region in the Philippines de-escalated, the conflict over autonomy in Myanmar’s federal states Kayah and Karen as well as the conflict between communist groups and the Philippine government escalated. Other than last year, the conflicts between Azerbaijan and Armenia led to the observance of two wars in Europe, while the Donbass conflict in Eastern Ukraine was listed as a limited war.

The majority of interstate conflicts documented by HIIK were non-violent in 2020. Compared with the past ten years, however, a marked increase in violent conflict dyads was recorded in the observation period. While eleven interstate conflict relations were characterized by violence in 2019, this number rose to 19 in 2020. Even though the limited war between India and Pakistan de-escalated, the dispute between Armenia and Azerbaijan was the first interstate war observed since 2012.

What possibilities do you see for cooperation with IPB?

We are very happy about the possibility of cooperating with the IPB. Although our name may suggest differently at first, ultimately we hope that our work contributes to a more peaceful world. We strongly believe that by furthering our knowledge of conflict and circumstances in which it may escalate or de-escalate, we simultaneously further our understanding of the conditions of peace. At this point, it is important to point out that conflict is not negative per se. For example, how do we evaluate resistance against a repressive regime? Moreover, especially non-violent conflicts can have a decisive and constructive impact. And it is essential to our approach that we observe both violent and non-violent conflicts, their historical background, dynamics, active and inactive phases as well as how they are negotiated and/or ended. This being said, our key competency is a strong expertise on conflicts worldwide and we have a large network of conflict researchers who are motivated to share their knowledge and insights. Cooperation with IPB might include attending and organizing events involving our researchers such as workshops and a deeper academic as well as practice-based discussion on analysing peace.

To learn more about the HIIK’s work, you can visit their website. The latest version of the annual publication is here: Conflict Barometer.