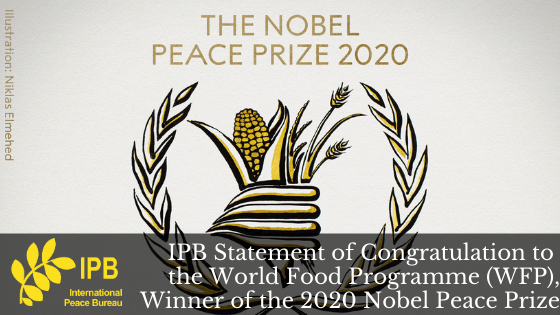 IPB Statement of Congratulations to the World Food Programme (WFP), Winner of the 2020 Nobel Peace Prize

The International Peace Bureau, 1910 Nobel Peace Laureate, welcomes the Nobel Committee’s decision to award the World Food Programme the 2020 prize. The WFP has played an essential role in addressing food shortages and hunger in conflict zones around the world in a time when the severity of such crises are growing – from the effects of climate change to the use of hunger as a tool of war, food security remains a persistent and dangerous global issue.

We cannot ignore the cyclical role of hunger in war; food shortages can lead to conflict, and conflict can equally lead to food shortages. Similarly, the use of sanctions as punishment oftentimes increases the suffering of those already at risk of food shortages. The WFP is a leading figure in both conflict prevention and conflict resolution – tackling the issues of hunger and conflict from both ends and working toward a more peaceful and just world.

The reception of the Nobel Peace Prize will provide the WFP with much needed resources, but it also serves as a reminder that wealthier countries must contribute greater amounts to end world hunger. Herein we see the central role of the Sustainable Development Goals (SDGs) – and the role of all nations, working in cooperation, to reach their realization. While the WFP’s contribution is sizeable, their work will only become more difficult in the coming years as climate change wreaks havoc on agricultural sectors and conflicts prevent food from reaching the areas in greatest need.

There is a clear lesson to be drawn from this: nations must invest in human security and development, rather than on militarization. Now is the times to demilitarize – to decrease our spending on weapons of war, which themselves contribute to climate change – and invest that spending in food security, green technology, and systems of cooperation such as the United Nations. In these times of Covid-19, this becomes even more important, as those who live in areas that already suffer from food shortages (as well as those who come to help) are put into great risk with the pandemic. We again back the UN Secretary General’s call for a Global Ceasefire.

To conclude, we again congratulate the World Food Programme for the award and for all the work they have done. We call on individuals, organizations, and nations, to support the WFP by making their work easier and fighting for a greener, more just future, and a world without war.