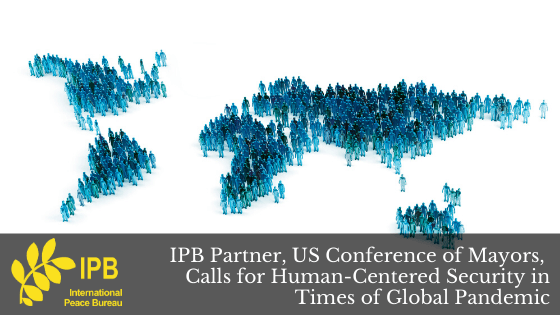 At the close of its 88th Annual Meeting, held virtually due to the COVID-19 pandemic, on June 30, 2020, the United States Conference of Mayors (USCM) Executive Committee unanimously adopted a sweeping resolution Calling for Human-Centered Security in a Time of Global Pandemic. The new resolution calls on the President and Congress: to support United Nations Secretary-General Guterres’ call for an immediate global ceasefire and international cooperation to address the COVID-19 pandemic; to reconceptualize security in human-centered terms, and to redirect funds currently allocated to nuclear weapons and unwarranted military spending to support safe and resilient cities and meet human needs; and to lead a global effort to prevent nuclear war and actively pursue a verifiable agreement among nuclear armed states to eliminate their nuclear arsenals.

The USCM resolution opens with a stark quote from United Nations Secretary-General António Guterres, who on March 23, 2020 declared: “Our world faces a common enemy: COVID-19. The virus does not care about ethnicity or nationality, faction or faith.  It attacks all, relentlessly. Meanwhile, armed conflict rages on around the world.  The most vulnerable — women and children, people with disabilities, the marginalized and the displaced — pay the highest price. They are also at the highest risk of suffering devastating losses from COVID-19.  Let’s not forget that in war-ravaged countries, health systems have collapsed…. That is why today, I am calling for an immediate global ceasefire in all corners of the world. It is time to put armed conflict on lockdown and focus together on the true fight of our lives.”

The resolution also quotes United Nations High Representative for Disarmament Affairs Izumi Nakamitsu, who warned: “The specter of unconstrained nuclear competition looms over us for the first time since the 1970s. We are witnessing what has been termed a qualitative nuclear arms race, one not based on numbers but on faster, stealthier and more accurate weapons. Regional conflicts with a nuclear dimension are worsening, and proliferation challenges are not receding.”

The resolution reports that “the administration has requested over $740 billion for the military in its FY 2021 budget proposal, far more than the United States spent for military purposes at the height of the Korean or Vietnam Wars or the peak of the Reagan buildup of the 1980s”, noting that “the biggest increase in the proposed FY 2021 budget is a nearly 20% increase in spending on nuclear weapons at $45 billion”.

Warning that “the fact that this pandemic has come close to overwhelming the health care system even when only small fraction of the population has required hospitalization— and hospitals were intact to provide care – demonstrates that there can be no meaningful response to or recovery from nuclear war,” the USCM notes that “according to a recent study, the amount of money spent in one year by the U.S. on nuclear weapons could instead provide 300,000 ICU (intensive care unit) beds, 35,000 ventilators and 75,000 doctors’ salaries.”

In response to the current multi-faceted global crisis, “the United States Conference of Mayors calls on the President and Congress to support United Nations Secretary-General Guterres’ call for an immediate global ceasefire and international cooperation to address the COVID-19 pandemic.”

Fundamentally, the USCM “calls on the President and Congress to reconceptualize security in human-centered terms, and to redirect funds currently allocated to nuclear weapons and unwarranted military spending to support safe and resilient cities and meet human needs, including by providing immediate funding for critical needs exposed by the COVID-19 pandemic such as health care accessible and affordable for all, more robust public health capacity at every level of government, programs to secure housing and food security, and measures to assure secure funding for municipalities and states throughout this and future disasters for which they are the first line of defense.”

And “the United States Conference of Mayors reaffirms its call on the United States to lead a global effort to prevent nuclear war by renouncing the option of using nuclear weapons first; ending the sole, unchecked authority of any president to launch a nuclear attack; taking U.S. nuclear weapons off hair-trigger alert; cancelling the plan to replace its entire arsenal with enhanced weapons; and actively pursuing a verifiable agreement among nuclear armed states to eliminate their nuclear arsenals.”

Noting  that , “the United States Conference of Mayors has unanimously adopted Mayors for Peace resolutions for 15 consecutive years, on July 1, 2019 “Calling on All Presidential Candidates to Make Known Their Positions on Nuclear Weapons and to Pledge U.S. Global Leadership in Preventing Nuclear War, Returning to Diplomacy, and Negotiating the Elimination of Nuclear Weapons,” the USCM “urges all U.S. mayors to join Mayors for Peace to help reach the goal of 10,000 member cities by the end of 2020, the 75th anniversary year of the U.S. atomic bombings of Hiroshima and Nagasaki.”

As noted in the resolution, “Mayors for Peace is working for a world without nuclear weapons and safe and resilient cities as essential measures for the achievement of lasting world peace, and as of May 1 had grown to 7,905 cities in 163 countries and regions, with 218 U.S. members.” Mayors for Peace, founded in 1982, is led by the Mayors of Hiroshima and Nagasaki.

The United States Conference of Mayors is the official nonpartisan association of more than 1,400 American cities with populations over 30,000. Resolutions adopted at annual meetings become USCM official policy.