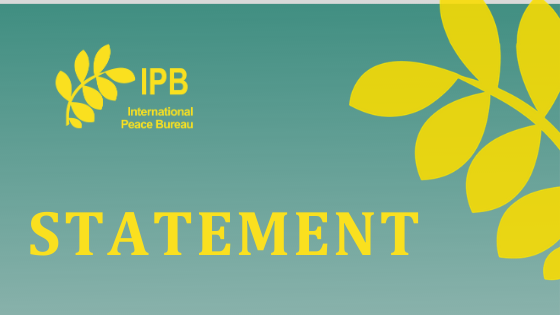 The world’s oldest peace NGO and Nobel Peace Laureate, the International Peace Bureau, regrets that the G20 missed an opportunity to support the call for an ‘immediate global ceasefire in all corners of the world’ and that this failure constitutes ‘the missing link’ from the G20’s response to the COVID-19 pandemic.

The G20 statement recognizes that ‘Global action, solidarity and international cooperation are more than ever necessary to address this pandemic,’ that it is a ‘powerful reminder of our interconnectedness and vulnerabilities’ and yet fails to apply this thinking to the need for peace.

In the world today there are over 200 wars and military conflicts which bring misery to people and are a handicap to any meaningful local attempts to deal with the pandemic.

The IPB sees the economic stimulus commitment of 4.8 trillion USD as a first step to protect jobs, incomes and reinforce social safety nets, and emphasizes the key role unions must play in those relief efforts.

The IPB emphasizes that never again must our healthcare systems play second fiddle to military expenditure and tax breaks to business and the well-off.

The IPB points out the importance of disarmament measures and concerted policies for reconversion of the military industrial complex to enable investment in the provision of healthcare and medical supplies.

The world spends 1.8 trillion USD on the military and still NATO reinforces its irresponsible call, demanding that its members allocate 2% of GDP to their military.

We consider that the G20 missed the opportunity to kickstart peace processes in the world.

On 26 March the UN Secretary General said: ‘It is time to put armed conflict on lockdown and focus together on the true fight of our lives …to silence the guns; stop the artillery; end the air strikes … It starts by stopping the fighting everywhere. Now.’

The IPB reiterated that same appeal to the G20 ahead of their Summit.

Many G20 members are engaged in wars and armed conflicts, in increasing expenditure on nuclear weapons and walking away from agreements to reduce nuclear tensions.

Saudi Arabia, the host of the 2020 G20 Summit, is the world’s number one importer of weapons and an aggressor in the Yemen war.

The IPB’s member organizations are angry and disappointed that the UN call for peace and a global ceasefire was not even mentioned in the G20 statement.

The urgent needs of the world’s people are for their nations to shore up their health defences and their ability to provide care to the sick, not to pump billions into weapons.

The G20 Summit should have seized the opportunity to address peace, peace processes and peace building.

It is important that the people and the peace movement mobilise for peace and the IPB supports the petition campaign here.

In the coming weeks the IPB will launch its 2020 campaign to reduce arms expenditure (GCOMS) in the world.