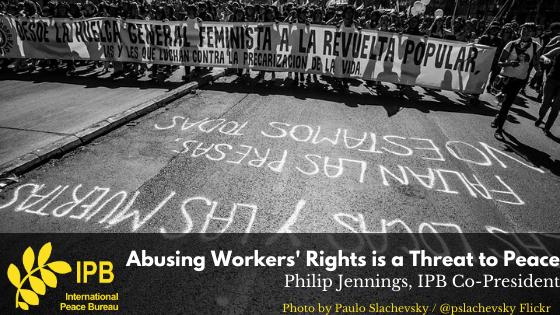 Abusing workers’ rights is a threat to peace.

The IPB has always considered the respect for human and workers rights as critical pillars for peace in our nations. Abuse these fundamental rights and the floodgates are open to weaken peace, democracy and social justice. Take away the freedom of expression, protest, association and the balance of power tips further toward authoritarianism and raw and abusive  corporate power.

If there were a Doomsday Clock for human and workers’ rights, then the second hand would have moved closer to midnight with the publication of the 2020 International Trade Union Confederation (ITUC) Global Rights Index.

The 2020 results should ring alarm bells throughout the IPB family.

To summarize the results from 144 countries:

The report was published at a time when Facebook was exposed for developing and marketing new workplace software attuned to aid union busting, when Google and Amazon have victimized staff for promoting union organisation. In the USA alone, over 90% of union campaigns face union busting intimidation tactics.

If trade unions and workers are refused the right to organise, negotiate and protest, then the oxygen they require to live and breathe is denied.

Sharan Burrow, the ITUC General Secretary, commented “The Global Rights Index exposes a breakdown in the social contract that governments and employers have with working people. There’s a trend to restrict working rights through violations of collective bargaining, withholding the right to strike and excluding workers from unions.”

The IPB has joined its voice to the call for a just recovery and a new social contract as we emerge from the devastation wreaked by the Covid-19 pandemic. Policies to build back better must deepen respect for human and worker rights; in poll after poll, people are giving record support to the trade union movement.

It is time that this support is adapted into government and business policy. We have the instruments – from the International Labour Organization (ILO) to the United Nations, and the UN Guiding Principles on Business and Human Rights in particular. Every government and business should put into practice due diligence measures to stamp out the adverse consequences of their actions on human rights. Now that would be “building back better.”

Read the statement in French here.