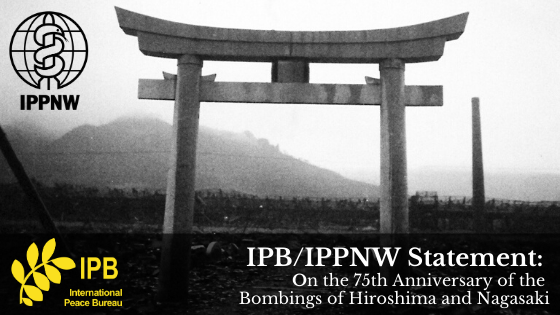 As we recall the unprecedented horrors that the citizens of Hiroshima and Nagasaki experienced on August 6 and 9, 1945, we reaffirm the determination of our organizations to ensure that nuclear weapons are never used again.

In just two days, the two primitive atomic bombs dropped over Japan killed a quarter of a million women, children and men. Yet from the atomic ruins, an unwavering resolve has survived to bear witness to the personal human tragedy. For 75 years, the Hibakusha have spoken out as the voice of experience and hope for the urgent imperative of eliminating all nuclear weapons.

This inspiration is now the subject of a new feature length film, The Vow From Hiroshima. We invite families and friends to join us on August 9th in honoring the Hibakusha with a special 24-hour screening of this uplifting documentary, told through the lens of the growing relationship between Setsuko Thurlow, Hiroshima survivor and lifelong nuclear disarmament activist, and Mitchie Takeuchi, filmmaker and daughter of a Hiroshima survivor. It is through this friendship that the film weaves the history of the post-nuclear era and the growing disarmament movement, including the United Nations’ historic adoption of the Treaty on the Prohibition of Nuclear Weapons. Join us and become a part of The Vow to help us preserve the memory of the atomic bomb survivors for succeeding generations. The screening is sponsored by IPPNW, IPB, Hibakusha Stories, and ICAN. To stay up-to-date on The Vow, including the streaming link, join our Facebook event.

Today, nine nations have stockpiled enough thermonuclear weapons to end human civilization and are on a massive spending spree to modernize and expand their arsenals. In 2019, global military spending experienced the largest annual increase in a decade, reaching $1.917 billion, which equates to $249 per person on Earth. The US is pressing NATO states to deploy a new generation nuclear-capable fighter planes to deliver more “usable” variable yield nuclear weapons against human populations.

Rather than investing in manufactured humanitarian catastrophes, governments should be directing scarce resources into programs that preserve and protect human health and well-being. IPB has been campaigning through the Global Campaign on Military Spending for a drastic reduction and the re-allocation of resources to the global challenges facing humanity.

Medical experts have warned us for years of the potential for deadly pandemics, such as we are now experiencing with the novel coronavirus. The worldwide response, while better in some countries, has clearly not been equal to the threat. Climate scientists have similarly warned for decades about the existential threat posed by “nuclear winter.” Contemporary research has shown that the atmospheric effects of even a limited nuclear war would cause a collapse in grain crops and put up to two billion people at risk of starvation, in addition to causing 20 million deaths in the first week as a result of the fires, explosions, and radiation effects.

We ignore these experts in infectious disease, climate science, and the health effects of nuclear war at our peril. There is no vaccine against the deadly threat of nuclear war, which could prove to be humanity’s “final epidemic.” As the medical professionals of IPPNW and other major global health organizations have said for decades, prevention of nuclear war is the only cure and, therefore, nuclear weapons must be abolished.

We therefore call on all nations to join the 2017 Treaty on the Prohibition of Nuclear Weapons (TPNW), passed by a vote of 122-1-1 at the United Nations. 40 nations have signed and ratified, leaving only 10 more until the nuclear ban treaty enters into force, establishing an international norm condemning and banning these weapons of indiscriminate mass destruction, as has previously been done with chemical and biological weapons.

The pandemic has taught us that all the world’s great needs and threats are linked. By reallocating bloated military spending and reorienting nations to resolve conflict through peaceful negotiation, people and governments throughout the world can more easily tackle the enormous economic and civil injustices that give rise to conflict and fuel the fire of climate change. Each victory in each arena must be used to feed progress elsewhere if humanity is to survive this century.

As we remember the victims of the atomic bombings 75 years ago and hear the stories of the survivors, we realize more than ever: we are all in this together.