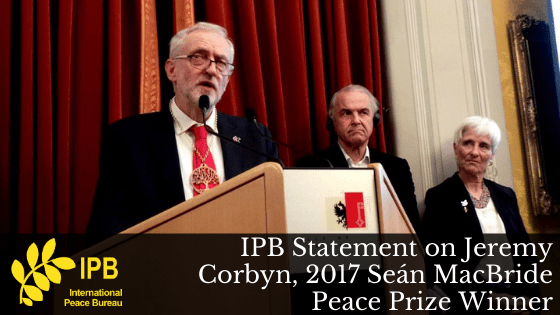 The International Peace Bureau recognises Jeremy Corbyn as a lifelong campaigner against racism, against war and for a peaceful and tolerant world. In 2017 IPB awarded him the Seán MacBride Peace Prize for his ‘sustained and powerful political work for disarmament and peace’ and his record shows that he has also championed the oppressed, the poor and the disadvantaged.

The IPB is united in its opposition to anti-Semitism and racism in all its forms. We remain united for a world free from fear.

We will continue to work with Jeremy and with all who strive for peace and justice.