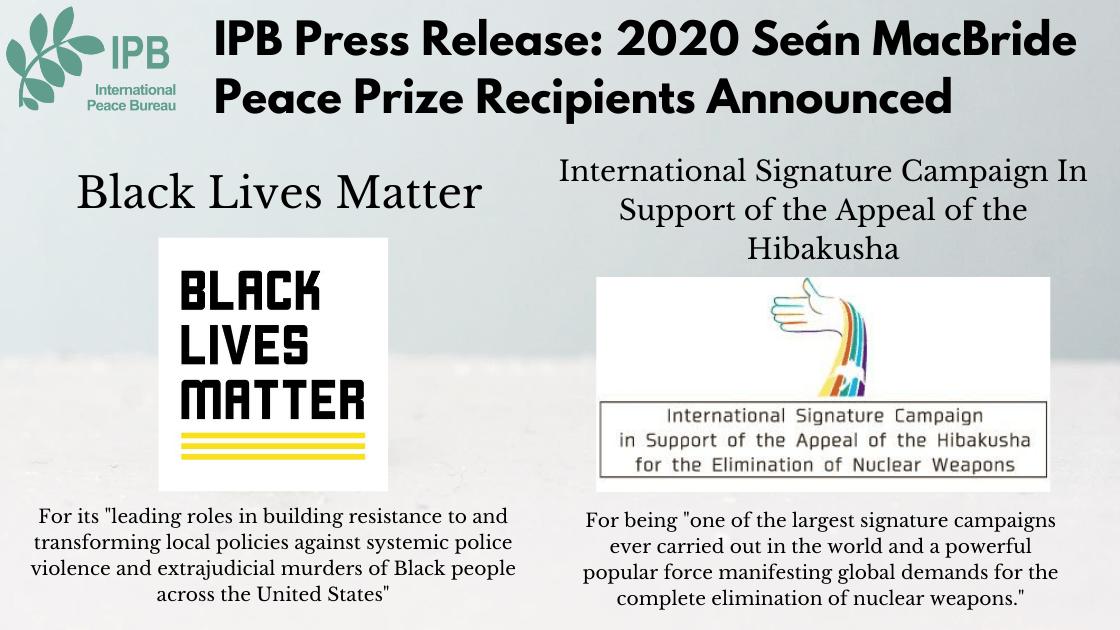 The International Peace Bureau awards the Seán MacBride Peace Prize (see also here) every year to a person, or organisation, or movement in recognition of its outstanding work for peace, disarmament, human rights. It is named after Seán MacBride, a Nobel Peace Prize winner who was chair of the IPB from 1968–74 and president from 1974-1985.

This year the IPB Board has chosen to award the following two winners with the prize:

Black Lives Matter (BLM) is a decentralized human rights Black liberation
movement with chapters in the United States, the UK, Canada, and Japan. The BLM Movement advocates for an end to police and other state sponsored violences, abolition of prisons, racial capitalism, and the interlocking social, cultural, and political harms of white supremacy and racism. BLM imagines a world where all Black peoples are free and flourishing in full dignity, self-determination, and power.

The BLM Global Network and its individual chapters have played leading roles inbuilding resistance to and transforming local policies against systemic police violence and extrajudicial murders of Black people across the United States. It has shifted the national narrative, political landscape, and expanded the vision for true democratic possibilities within the United States. It’s mission is both specific and universal in that an end to devaluation of Black life everywhere affirms that all people are created as equal and worthy of liberty. Its voice, visibility, and power have commanded international influence, recognition, and solidarity. The BLM movement seeks reparations for wilful and lasting harms caused to African Americans by slavery, and investment in communities—in healthcare, education,
economic, housing, and mental health infrastructure and resources.

As a networked movement, BLM also recognizes the need to center the leadership of women, queer and trans people, the economically poor and working class. BLM has made the commitment to placing those historically dehumanized and excluded at the center of building a world in which all Black lives truly matter.

IPB Co-President Philip Jennings will address and congratulate the International Signature Campaign in Support of the Appeal of the Hibakusha during the  online Peace Wave World Conference on the 9th of August.

Information regarding the Prize Ceremony will be published soon.

You can also access the Press Release as a PDF here.