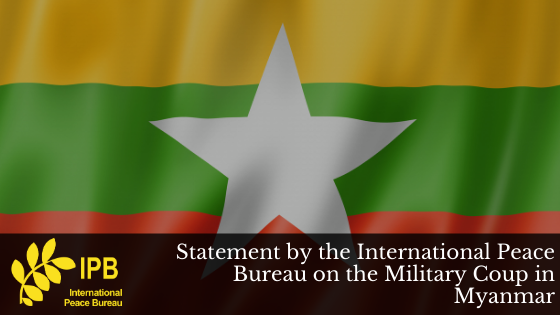 The International Peace Bureau (IPB), 1910 Nobel Peace Laureate, joins the world in strongly condemning the Myanmar military’s seizure of total state power through a military coup on 1 February 2021 and its’ subsequent dismissal of the parliament elected in November 2020 and the declaration of a martial law today, 9 February 2021.

The International Peace Bureau unequivocally sides with the 56 million people of Myanmar/Burma belonging to 62 ethnic minorities and indigenous groups at this time. The IPB stands strongly for peace, justice and democracy and are in solidarity with the mobilization by medical, educational, women, indigenous communities and other sectors in Myanmar/Burma who have called on the public to resist the military takeover, through nonviolent means and through a mass campaign of civil disobedience.

IPB, in solidarity with civil society in Myanmar/Burma calls on the military to immediately:

The IPB calls on the United Nations, all governments, but particularly Asian governments and the global civil society to :

IPB realise that this is a critical time for introspection, by the whole international community, as we all find new ways to manifest solidarity with the people of Myanmar/Burma and amplify their call for resistance to military coup, the martial law and the establishment of genuine democracy that holds the aspiration of the people of Myanmar/Burma who have been struggling for long. IPB and the international community stand with them with solidarity.