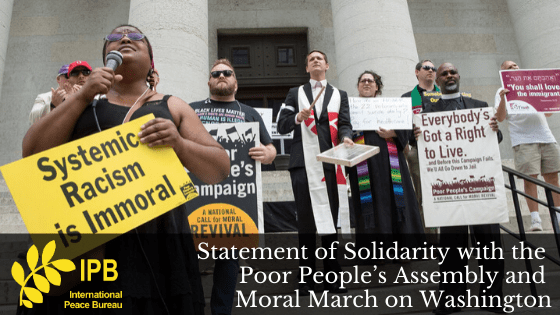 The International Peace Bureau, a Nobel Peace Prize recipient organization, was proud and fortunate to collaborate with the Poor People’s Campaign on last spring’s Online World Conference 2020: Abolish Nuclear Weapons, Resist and Reverse Climate Change, for Social and Economic Justice.  The Poor People’s Campaign’s recognition of the seminal importance of building on Martin Luther King, Jr.’s nonviolent commitments – to challenge the mutually reinforcing triple evils of racism, poverty and militarism, with the addition of your commitment to environmental sustainability – is precisely what our time requires, and it inspires people around the globe, as well as across the United States.

We are encouraged by The Mass Poor People’s Assembly and Moral March on Washington and have promoted it among our affiliated organizations.  The Covid-19 pandemic, which has disproportionately taken the lives of people of color and wreaked economic devastation while massively increasing the wealth of those already rich, underlines the urgent need for greater economic security and equality. It also illuminates the absolute failure of the United States record military spending while assaulting people’s access to health care, housing, food stamps and education.

We trust that the Assembly will help to fuel the mass protests to end white supremacy and to create a just U.S. society; protests that began following the police murders of Breonna Taylor, Ahmaud Arbery, and George Floyd.  Militarized police, militarized culture,  and the diversion of vast amounts of limited national financial resources to the military-industrial complex from addressing essential human needs are assaults on basic human rights that must be ended.

For more information on the Assembly and Moral March, visit https://www.poorpeoplescampaign.org/.