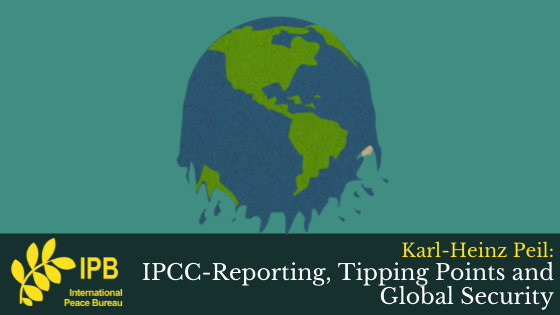 Article written by Karl-Heinz Peil about ‘Code red’, global warming and the risks of a global war.

Already with his message on the New Year in 2018, the UN Secretary-General António Guterres declared: “I am issuing an alert – a red alert for our world”. Perils, including deepening conflicts and new dangers, emerged, and global concerns over nuclear weapons reached the highest since the Cold War, he added.  At the same time, impacts of climate change worsened at an alarming rate, inequality increased and horrific violations of human rights were committed.

This year, on August 9th, after the release of the new IPCC report, Guterres said the Working Group’s report was nothing less than “a code red for humanity. The alarm bells are deafening, and the evidence is irrefutable”. The new report was created by 234 authors from 65 countries and considered more than 78,000 review comments. Some people may ask: Did the IPCC working group underestimate global warming against the former Assessment Report in 2014? The answer is neither yes or no because of the complexity of the subject. We need to understand the basic approach to global warming and the corrections against former reports. A term introduced by the IPCC more than 20 years ago and was already dominant in the former Assessment Reports: Tipping points. This is the reason why all modelling and calculated scenarios with a focus on CO2 emissions have uncertainties. When a single tipping point is exceeded, the acceleration of global warming is irreversible. The problem behind such tipping points is that science doesn’t know the threshold of (regional) warmings exceeded and the behaviour of climate feedback with surprises and abrupt changes. Examples are glacier melts, the Greenland ice sheet, and the Atlantic Meridional Overturning Circulation. Even the new IPCC report indicates only probabilities with estimations between low or high confidence about tipping points. But it is sure, that some tipping points have already been exceeded.

We should also talk about tipping points in the context of global militarization. What we know is that the amount of military spending and weapons of mass destruction account for far more financial and other resource forms compared with investments in renewable energy systems and other expenses to avoid greenhouse gases. These expenses are missing in the struggle with global warming. Furthermore military activities create very high amounts of greenhouse gases. Above all the US military has air crafts and warships in operation all over the world and around the clock. As a result, militarisation directly contributes to global warming.

But what we don’t know is more decisive and similar to global warming and tipping points: Single events can trigger a global war.

Have a look back in history. In 1914 the First World War started. The political situation was in some way similar to global confrontations today. Finally, the assassination in Sarajevo was a regional event that triggered the global war. The military creates a lot of tipping points. Already in the past computer errors indicated an imminent nuclear weapons attack, but which could be prevented by human decisions. Autonomous weapons and automatic decisions will create more tipping points. In recent times we had also dangerous examples with NATO war games, crafts amassing near the Russian border, or NATO warships violating maritime borders.

But different from the complex global ecosystem, such tipping points could be eliminated with a concept of global security based on multilateralism. The IPCC report addresses food (in) security as a primary growing problem, which also has its own goal (No. 2: Zero Hunger) within the Sustainable Development Goals (SDGs), which were approved by all UN members in 2015 with the time horizon of 2030. The SDGs contain 16 single goals and last but not least No. 17: Partnerships for the single goals. How far away are we from this goal and non-exclusive cooperation?

In November 2019 the French and German Foreign Ministers launched an “Alliance for Multilateralism” as “an informal network of countries united in their conviction that a rules-based multilateral order is the only reliable guarantee for international stability and peace and that our common challenges can only be solved through cooperation.” Although almost 50 countries have joined this alliance, it serves no other purpose except maintain US-based unilateralism, adding the imperial ambitions by Germany and France. To give a comparative figure: in 2017 122 nations within the UN General Assembly signed the Treaty on the Prohibition of Nuclear Weapons.

But propaganda with a “rules-based multilateral order” and a selective view to human rights is only one obstacle to reaching real multilateralism and international cooperation. In parallel Germany and France are going to develop a “Future Combat Air-striking System (FCAS)”. With expanses far beyond some hundred billion euros, it is scheduled to have a digital network with jets and drones in the air and tanks on the ground. Nobody knows against what kind of enemy this system should be useful, which is scheduled to be operational by the year 2040. But one thing is sure. If the military tipping points will not trigger a global war in the next years, the main enemy of global militarisation will be the destructive power of nature – a long time before the year 2040. US-author Michael T. Klare analysed in his 2019 published book “All Hell Breaking Loose” how the Pentagon worries about global warming with the risks of rising sea levels and tropical storms.

The Pentagon is aware that most US military bases all over the world have sensitive locations, above all in the Caribbean Sea and the western part of the Pacific. The US military would be unable to handle multiple military involvements when climate-related hurricanes/typhoons, pandemics, droughts, and food shortages in ethnically divided nations cause conflicts. Michael T. Klare describes in his book several similar scenarios which already happened in the past, based on documents and talks with staff from the Pentagon. Therefore, keeping up with global militarization means waiting for the extermination of humanity or at least waiting for the natural destruction of global military bases.

Consequently, the global peace movement has suitable arguments to convince people who focus on fighting for system change against climate change. First, Global Militarisation includes tipping points in the same way as the global ecosystem. A global war by incident becomes more and more probable.