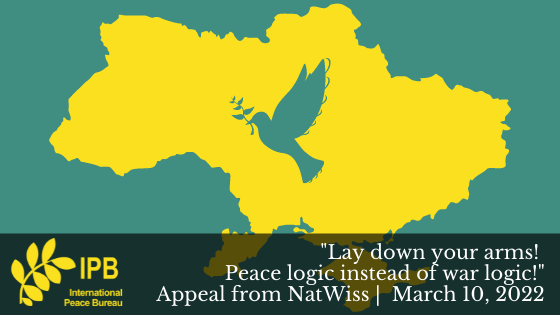 Appeal against the Ukraine war and for demonstrations for peace and disarmament.

NatWiss condemns Russia’s attack against Ukraine, which is unjustifiable and violates the rules of international law, with incalculable victims and damage. At the same time, we do not forget that in the run-up to the war, warnings and suggestions were ignored, principles of war avoidance and peacekeeping were disregarded. The knowledge about causes of war and peace solutions must be used to stop the acts of war and to avoid further spirals of escalation. Therefore, we demonstrate for peace and against all militarism!

In this war, everyone stands to lose, no matter who declares themselves the “victor” on the rubble and graves. The main victims are the people of Ukraine, the dead, the wounded and those fleeing. The consequences also affect the people of Russia and people all over the world. The international law loses, the European peace order and civil society. The damage and costs of war destroy the conditions for sustainable peace and the solution of global problems: Poverty and hunger, displacement and flight, environmental destruction and climate change. A nuclear war would be the end of humanity: No Future!

Sacrificed is also the truth. War propaganda dominates on all sides. The overheated echo chamber of war indignation erases earlier knowledge that is needed for the future. Hardly any questions are asked about how the catastrophe came about, who drove the spiral of escalation for decades. Is it just Putin, who has been declared a demon, or also NATO, which after winning the Cold War expanded across all borders to the brink of war? Those who have undermined peace with rearmament and military interventions, and who have even broken international law, are bad advisors for peaceful solutions. Driven by the arms industry that earns money from war, these forces have long been pushing for a “turning point” in geopolitical power struggles and a further rearming of NATO, making the world more insecure. With the start of the war, the German government doubled its military spending, which had risen sharply in recent years, and now exceeds that of Russia alone before the war. Fighting militarism with even more militarism is no more sustainable than countering climate change with air conditioning.

In the face of oblivion, it is the duty of science to activate knowledge about war and peace in order to end the Ukraine war and prevent further wars:

We call for a joint demonstration for these goals.