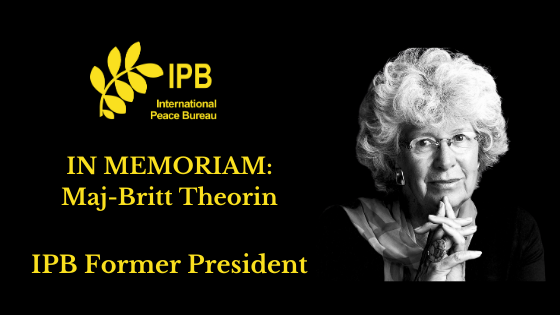 The IPB family is in mourning after the recent death of Maj-Britt Theorin, MEP, who was President of IPB from 1992 to 2000. Those post-Cold War years were a time of some optimism, though clouded by the wars in the Balkans and the genocide in Rwanda. However many activists shared the hope that in the new international context a breakthrough on disarmament might be possible.

From this point of view, probably the most notable achievement with which Maj-Britt was associated in this period was her participation (the only woman) in the Canberra Commission on the Elimination of Nuclear Weapons (1995–96) . Their detailed step-by-step plan on how to get rid of the nuclear weapons, now largely forgotten was one of the pre-cursors to the Treaty on the Prohibition of Nuclear Weapons (TPNW). Another pre-cursor was the Advisory Opinion on the legal status of nuclear weapons delivered by International Court of Justice in 1996. This was the culmination of many years’ work by IPB and others in the World Court Project. Maj-Britt chaired the IPB conference held in Brussels to celebrate this achievement. Following in the path of her two great Swedish predecessors, Alva Myrdal and Inga Thorsson, Maj-Britt never wavered from her vision of a nuclear-free world.  In fact, her first motion she wrote as a youth politician in the Social Democratic party was about nuclear disarmament.

Maj-Britt Theorin`s life was deeply committed to peace, global justice and emancipation. After obtaining her Ph.D. she became a Swedish Social Democratic politician and diplomat, holding the post of Ambassador for Disarmament (1982–1991). She served as a member of Parliament from 1971 to 1995, and as a Member of the European Parliament from 1995 to 2004.

She was also President of the umbrella union of six women’s and peace leagues ‘Operation 1325’ (the number of the UNSC Resolution on women, peace and security) in Sweden and member of the board of UN Women Sweden.

Up to the end of her life she was active as a lecturer and peace writer, not least trying to influence her party, and the Swedish government, to sign the TNPW.

We met her the last time in 2019, when she underlined how much fun she had had working with the IPB community, and how happy she was to be able to serve in the organisation.  IPB will greatly miss our former President. We were fortunate to have such a distinguished politician at the helm of our organisation. We have to continue working for peace in the same direction without her.

We convey our deep sympathies to her family, and to her friends and colleagues all over the world.