For many it was the threat of a war with Iran and the stationing of new nuclear weapons that led thousands of people to the streets to protest against the US Air Base in Ramstein on June 29th2019. The more than 5,000 participants that took part in the demonstration were particularly protesting against the Air Base’s role in drone warfare and a possible future drone war. “No armament with us” was the demand that unified the peace activists during the colorful and diverse demonstration from Ramstein-Miesenbach city center to the US Air Base Ramstein. The mood was optimistic. The opening and closing rallies included thought-provoking speeches that presented diverse arguments against war, whilst also highlighting the importance of the peace movement and particularly the protest actions in Ramstein. The lively cultural program that followed was stirring and motivating. It was this powerful and united stand against war that shaped the protest actions during the week-long peace camp in Ramstein. 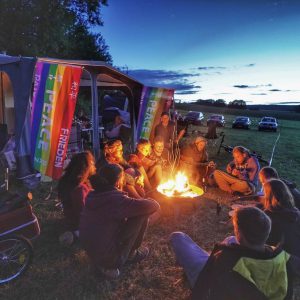 It has been repeatedly emphasized that the current threat of war emanates from the US government, particularly from Donald Trump, who is an immense threat to world peace. European and German politicians are supporting these dangerous policies out of political solidarity and self-interest.

However, the growing mobilization of many young people and the cooperation between the peace and environmental movement that is currently crystalizing (especially due to the Air Base Ramstein, which is poisoning the entire region) represented a great chance for many new faces to join the protest actions in 2019.

Among the 5,000 peace activists that took to the streets on Saturday to protest against the US Air Base, we were joined by hundreds of young people, many of whom had been won over by Youtube influencer “Rezo’s” video or were part of the new and growing “Fridays for Future” movement.

This collective global engagement against war and military bases was further strengthened by the participation of international guests coming from over 14 different countries. “We will come back as long as drone warfare and war continue to shape the politics of our country.” This was the powerful stand the participants took during the demonstration – A stand that would not be influenced or changed by nonsensical, bureaucratic regulations that were being enforced by the local district administration.

The heart and soul of the protest actions was the Peace Camp, which was set up for one week by tireless helpers and took place on a large meadow. “We want to shape our own lives and futures;” This thought and spirit, along with the commitment of the peace activists and the lively cultural contributions on stage, shaped the fantastic atmosphere in the Camp. On the last day, peace activists came together to celebrate five years of resistance against the US Air Base in Ramstein.

The Peace Camp also included a “Peace Workshop,” which hosted over 30 different events and an international anti-base congress. The final declaration of the Congress summarizes the principal demands of the campaign and calls for the termination of the Stationing Agreement and the dissolution of Germany’s NATO membership. A speech given by the chairman of the Friends of the Earth Germany (“Bund für Umwelt und Naturschutz Deutschland (BUND)”) was certainly a highlight of the Congress. He called for a cooperation between the peace and climate change movement; a cooperation that represents the future of both movements but undoubtedly, also a great challenge.

On Friday, peace activists from the camp came together with locals from Ramstein and Kaiserslautern in the Apostel Church to learn more about the unlawful actions of the US Air Base and the importance of protesting against it. This event was particularly promoted by the Kaiserslautern Palatinate Initiative “Entrüstet Euch!” (“Demilitarize yourselves!”). The football tournament organized by the initiative, where 10 completely different teams competed, showed not only the powerful role sports can play in peace-building, but also acted as a contribution against racism and for solidarity with refugees.

Behind these inspiring events and activities stand numerous dedicated people, without whom none of this would have been possible – the AG Friedenscamp team, the technicians, the kitchen-helpers in the camp, the many people who supported the team during the events, the artists, the speakers and many more. The helpers who helped Ramstein 2019 unforgettable could not be thanked enough. They truly represent the spirit of the campaign Stopp Air Base Ramstein: it lives and thrives because of you. It is undoubtable that they createded something special this year.

Although everyone can be extremely proud of what was achieved, it is necessary to reflect and think about what can be done to make the protest actions in Ramstein even bigger and better. It must not only expanded on what was already achieved, but also develop new ideas. It is clear that the end of possibilities has not been reached yet and that the movement must continue to grow so that the voices of resistance will no longer be overheard in Berlin.

Nevertheless, the future of this campaign is bright and the movement will continue to live and shape it together. There will certainly be major campaigns against the Ramstein Air Base in 2020 as well. As in the past, we will overcome them together. 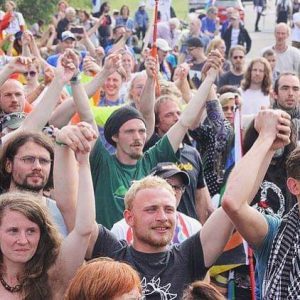