The second week of the negotiations for a Treaty on the prohibition of nuclear weapons started with the publication on June 27th of the second draft of the Treaty (now called a “Treaty” and no more a “Convention”.) The 130 states in the room are now actively negotiating long hours in small or big committees in order to keep open the possibility to finalize a good text by June 7th.

Although some articles still need to be enhanced, the whole 2nd version goes in a good direction with strengthening the language, some more clarity on the obligations and a longer and stronger preamble which gives a good background of the treaty spirit.

It is now reflecting most of what has been important for civil society as a background for the prohibition of the worst weapons ever:

One can still identify a tension in the text, which is illustrated in the plenary sessions by some states like Nederlands using arguments coming from the Cold War era and the NPT vocabulary, and the language of others – the vast majority-  who are promoting a vision based on human security and the humanitarian concerns.

But the majority of states from all continents, the International Council of the Red Cross (ICRC), experts and lawyers, campaigners and the whole civil society coordinated by ICAN   ( #nuclearban) are pushing in the same direction for the strongest and clearest treaty as possible.

The more problematic provisions under discussion are related to crucial issues. How would a nuclear weapon possessor state join the treaty? Could they join the treaty while getting rid of their weapons “ as soon as possible”? This seems much to vague! The draft also authorizes  States to join after they would have destroy their weapons, but except a “cooperation with IAEA”, the provisions to prove that they have really destroyed the weapons and that the facilities to produce them have been destroyed still need to be clearly stated.

So need the provisions in the General obligations which requires more clarity to include a prohibition on “military preparation and planning for use” and on the transit of nuclear weapons.  But the prohibition of assistance in any activities already prohibited by the treaty can lead to new campaigning and boost interest over the financing or the transit of NW.

Other articles remain problematic, like the positive obligations related to victim assistance and environmental remediation which are too weak to address the terrible situation of the people and the environment that have already been exposed to nuclear explosions. But it should also keep the possibilities for those workers or neighbors of nuclear weapons facility, and all those along the nuclear chain to be included in the treaty with strong provisions for solidarity and assistance.

Discussions are heating up, the President, Mrs Elayne Whyte has choosen to work with little groups dedicated to some articles of the Treaty and meet from times to times for exchanging in plenary sessions where civil society can participate, but the works are now not anymore recorded and broadcasted.

Even if this is frustrating for those that can’t be in New York, it can also be seen by delegates as a guarantee to give them a little bit more freedom to achieve a strong Treaty.

The boycott of the nuclear weapons states and their allies has leant to a form of boycott from the media. The ban treaty negotiations have very little media coverage. It is a pity when one understands the historical move that the world is undertaking here but it has in a way helped this whole humanitarian initiative to grow in the shade of the humanitarian concerns, and this whole process is now almost ready to deliver a global treaty! 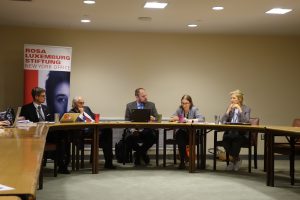 They looked over the treaty text and the current discussions and evoked about the role of civil society which has been crucial so far for making the treaty happen, and which will have once the text is adopted the main work to make sure it drives the world toward the total elimination of nuclear weapons.

IPB will be present up to July 7th and will organize more events. Lucas Wirl is taking over from Arielle Denis and will share the last developments on line. Stay tuned! 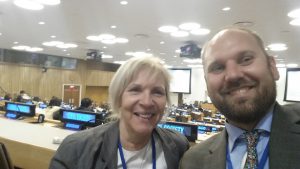