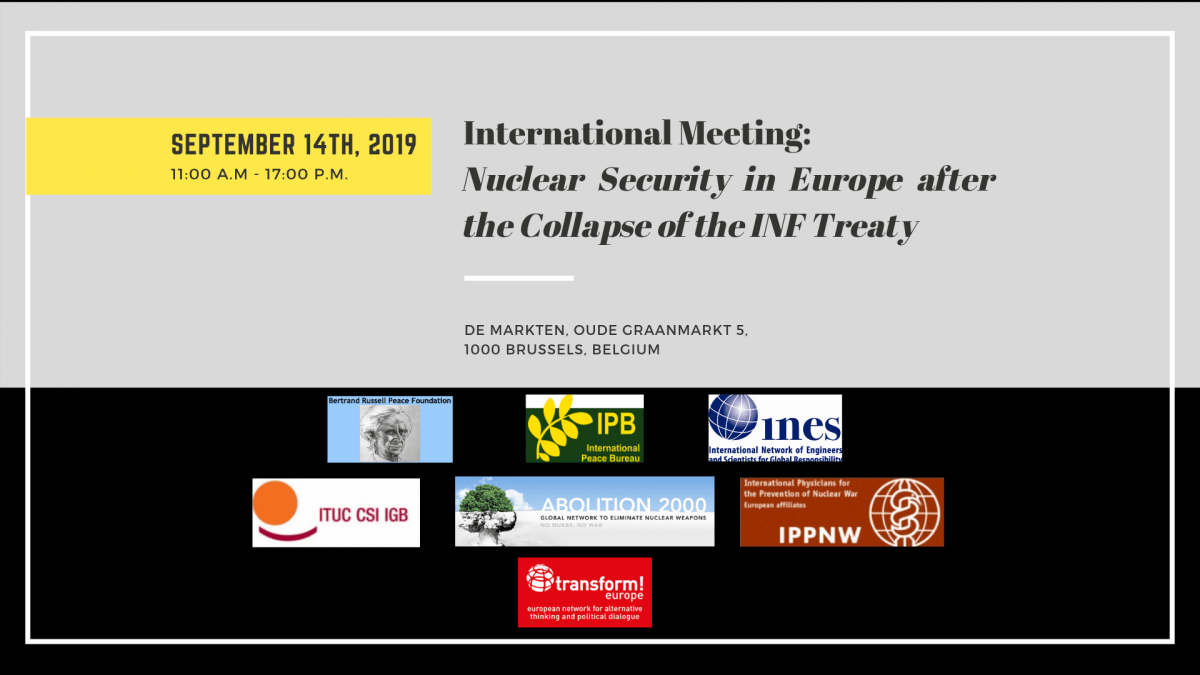 Tensions are growing among states possessing nuclear weapons and the collapse of the Intermediate-range Nuclear Forces (INF) Treaty brings Europe closer to the brink of another dangerous Cold War. Meanwhile, the UN Treaty on the Prohibition of Nuclear Weapons (TPNW) gains traction and opens new avenues for urgently needed common campaigns and actions.

Final appeal created and supported by the participating organisation:

European call for nuclear dis-armament Free Europe and the world from nuclear weapons!

Remember your Humanity and forget the rest

Since the nuclear bombing of Hiroshima and Nagasaki 74 years ago, we humans have lived under the constant threat of nuclear blackmail and the annihilation of all living things on Earth. This homicidal power, and the outrageous amount of effort and money spent on it, is unacceptable, especially at a time when climate change is also challenging our very existence. These two existential threats – nuclear war and climate change – are the most pressing problems of our time and demand our upmost attention.

Similar to the threat to our planet caused by climate change, the nuclear weapons situation has also reached a tipping point: a new nuclear arms race is already underway. All nine states that currently hold nuclear weapons are developing new and more elaborate nuclear weapons systems, inflaming tensions between them and with others. This continued preparation for nuclear war, the daily practice of nuclear blackmail, and the growing risk of miscalculations and accidents are bringing humanity to the brink of a nuclear catastrophe.

Furthermore, the world’s fragile arms control architecture, built over five decades, is collapsing. The systematic destruction of key disarmament treaties, such as the ABM Treaty, JCPOA and the INF treaty, and with the Outer Space Treaty and negotiations on a New Start Treaty also under threat, the world is heading towards Armageddon. In particular, the collapse of the INF treaty on August 2nd, for which citizens had fought successfully for in Europe in the 80’s, shows the depth of this crisis. Even the Non-Proliferation Treaty (NPT) – which will soon be the last remaining treaty on Nuclear Disarmament – is under heavy pressure.

New US nuclear bombs (B61-12) are due to be installed in Belgium, Germany, Italy, Turkey and the Netherlands in 2020, designed with new capabilities, including guidance systems that increase the possibility of them being used. New low yield nuclear weapons are being developed which could be used in warfare, and the possibility that nuclear and conventional weapons may be indistinguishable from one another could force a nuclear response against any kind of attack. The fact that even a ‘regional nuclear war’ where less than 1 % of the world–wide nuclear arsenal used would still cause a “nuclear winter” is still denied by leading military professionals and the leaders of these nuclear weapon states.

We undersigned are appalled by the revival of this cold war nightmare and by the waste of time and effort, as well as the irresponsibility of governments to address these major existential challenges. The military is the biggest worldwide emitter of CO2 and any nuclear detonation would massively add to climate disruption and the destruction of the ozone layer.

The vast majority of States and people committed to a world free of nuclear weapons are challenged to act now!

We call upon all Social Movements to support a European Campaign to halt the nuclear arms race and to work for nuclear and conventional disarmament. There can be no progress without major organized actions from citizens.