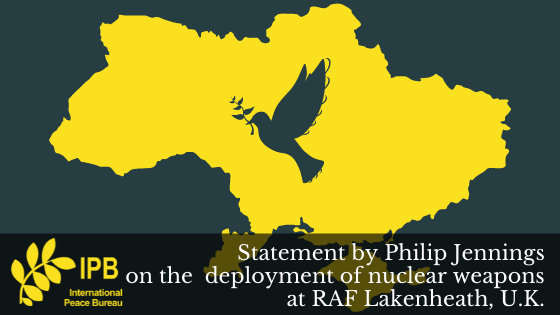 “I am here to express the solidarity of the world’s peace movement with your action here today. I speak for the world’s oldest peace organization the IPB. Still mobilizing for peace for 130 years. We will make sure your action today will echo around the world.

A brilliant American researcher spotted the details and rang the global alarm bell. His name Hans Christensen there is no relation to his Danish namesake HC Andersen. From fairy to nightmare tales. These missiles are ugly ducklings and will remain so, the emperor has the clothes of lethal killing machines CND and the people of Lakenheath you banished these weapons 14 years ago.

You mobilized. Changed minds. You did not remain silent.

As MLK said  `He who accepts evil without protesting against it is really cooperating with it`. You are called to protest this evil once again.

Today Lakenheath is the example of a global arms race out of control. Your brothers and sisters in Belgium, Holland, Germany, Italy are faced with this new wave of lethal militarization.

Budgets for war increasing military expenditure now over two trillion dollars, we ask where is the budget for peace? The budget for human needs and human security buckling under the strain of booming military budgets. I can assure you that they are mobilizing as they see these installations pushing the doomsday clock closer to midnight. The are awakening their public.

Let us applaud their action. The world is on edge.

A war in Ukraine. Climate devastation. Inequality.The rise of demagogues. Democracy and human rights in retreat. A global pandemic.

A world without a social contract. Fault lines everywhere. Poverty exploding in the UK and this failure of a UK government prefers to replenish and grow missile silos to ending foodbanks. That fits the definition of a morally bankrupt government.

Fault lines everywhere. Confrontation not cooperation. Superpower rivalry. This does not bring the world to a better place and today that toxic fault line runs through Lakenheath. We are staring into the abyss. Aggressive military doctrines menacing threats to use of nuclear weapons. Battle plans that include limited use of nuclear weapons. hey make them sound like childsplay they are not and are many times more powerful than the Hiroshima bomb.

As you all know and must shout out that we are an accident, miscalculation, mistake away from a civilization ending nuclear Armageddon. The nuclear powers have admitted a nuclear war can never be won and must never be fought. Meanwhile they walk away from those treaties that try to prevent this from happening.

We want a different world. We must invest in peace. We demand a ceasefire in the Ukraine and peace negotiations. We demand a global ceasefire and want to see war abolished.

Billions of people live in nuclear free zones and it is time for one in Europe. We must build a new architecture for preace for without it we face breakdown not breakthrough. For disarmament.

The IPB just concluded the work of a Global Commission on Common Security For our Shared Future.In doing so we marked the 40 th anniversary of the original Olof Palme report on Common Security. The basic message rings true today and `International security must rest on a commitment to joint survival rather than the threat of mutual destruction`. Words written at a time when superpower relations were at rock bottom, the risk of nuclear war high and real. Alternatives were developed then and we have done the same with our report.

We changed reality on the ground. We are summoned to do so once again. We must ReImagine Peace.

The peace movement must not be found wanting. We are billions with new generations understanding what existential threats face this planet. It requires all strands of our movement to organize and mobilise. In one month all peace roads lead to Vienna and the first states parties UN Conference on the treaty to prohibit nuclear weapons. That treaty says there is no place for missiles in Lakenheath, Kleine Brugel, Buchel,Volkel,Aviano and Ghedi or anywhere else.

We together fought for this treaty and others. In 2025 it’s the 50th anniversary of the Helsinki Declaration.The world changed. New institutions, accords, understandings, dialogue for peace. The movement succeeded then. nWe must do so again.

In closing we will transmit your anger, your call to action to the conference and to the peace movement worldwide. From Hiroshima and Nagasaki to The Americas, Africa, Asia and the Pacific they will be inspired by your action and will power demonstrated here today. From your local voices we will ensure that new global horizons for peace will sing.

The statement was given by Philip Jennings, Co-President of IPB, at RAF Lakenheath.