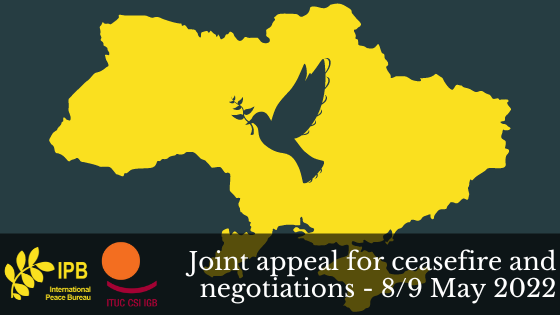 The biggest global peace network, the IPB, and the 200-million strong ITUC have written personally to Presidents Putin and Zelensky urging them to mark Europe’s “day of liberation” – 8-9 May – by declaring a cease fire as a precursor to negotiations.

The ITUC and IPB urge Presidents Putin and Zelensky to meet immediately for peace negotiations in a neutral venue, such as Vienna or Geneva, with the involvement of the UN and its Secretary General to serve as the foundation for a new peace architecture in Europe in which Russia’s and Ukraine’s security interests are safeguarded and secured.

Reiner Braun, IPB Executive Director, said: “The only way out of the crises and to avoid a nuclear catastrophe is negotiations and to start a dialogue – even when it is very difficult.

The Day of Liberation marks the end of World War II in Europe, and the liberation of Europe from fascism. The end of the war was on 8 May in western Europe, but 9 May in the then Soviet Union because of time zones.

The joint appeal to the Presidents of Ukraine and the Russian Federation is available here: https://www.ipb.org/wp-content/uploads/2022/05/ipb_ituc_appeal.pdf