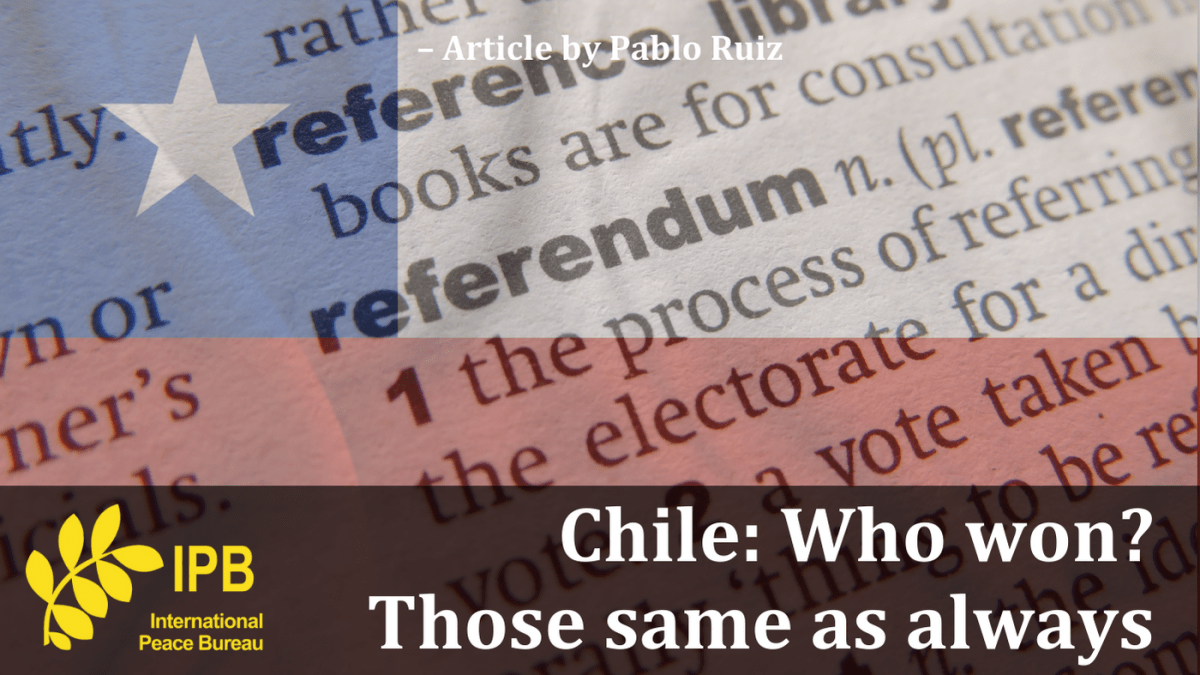 With 61.86% of the votes cast, the triumphal rejection to the proposal for a New Constitution in Chile, on the September 4th plebiscite, should invite us to a profound reflection on the exercise of democracy and its contradictions, such as the strong impact of the hegemonic media dominated by conservative sectors in Chile.

A truthful democratic country would never have a constitution whose origins and birth arise in a military dictatorship. Unfortunately, in the case of Chile, we have been governed for more than 32 years by the 1980s Constitution imposed during the dictatorship of Augusto Pinochet and tolerated, by the political elite, in this long transition to a true democracy.

The Constitution of 1980 has been the fundamental pillar through which the model of neoliberal and individualistic society has been maintained, in which economic, social, and cultural rights, among others, are not guaranteed to the majority of the population. According to a 2020 study by the World Inequality Database, with available information of 175 countries, Chile is the 8th country in the world with the highest concentration of wealth, where the 10% with the highest income gets 60.2 % of the country’s total income.

The Proposal for the New Constitution, which was rejected, stated that workers must have equitable, fair, and sufficient salaries. That all people have the right to health, education, housing, to care and to be cared for, to not suffer violence or torture, to fair trials. It recognized domestic work, the rights of our elders and children, of diversity, nature, native peoples, of the disabled. There are so many and, in a few words, it enshrined human rights so that people could live with full dignity.

It also stated that our nation “is committed to maintaining the region as a zone of peace” and that the Armed Forces and the police must “act with respect for international law and the fundamental rights guaranteed in the Constitution.” However, these proposals were rejected by a large majority of the Chilean population, incredible as it may seem.

The power of big media

The proposal for a New Constitution for Chile, which has been rejected, represented a major danger to the economic interests of the Chilean elite and the large corporations that control and concentrate the wealth generated in Chile. We can then understand why the US newspaper Financial Times was right when it noted in an editorial that “Chile’s decision to forcefully reject a utopian constitution” is “a remarkable example of civic maturity.”

Some say that it has been a punishment for the management of the new president Gabriel Boric, who is facing, as in many countries in the world, high economic inflation and that, logically, it affects broad social sectors. However, Gabriel Boric won the presidential elections with 55.87% of the votes in his favor – particularly, he obtained 4,620,890 votes. In his elections, voting was voluntary and 55% of the electorate with the right to vote chose to do it.

1 – During the last elections close to 50% of Chileans who have the right to vote did not vote and it is surely the first time they exercised this right. Why didn’t they vote voluntarily earlier? This sector of the population is very disinterested in the entire political system and in Chilean democracy, which is why they have not participated.

2 – The neoliberal system has strengthened the culture of individualism as a way of solving one’s own needs. A large portion of the population is not fully aware that human rights are an obligation of States.

3 – Perhaps the most important factor is that the Chilean elite, with the media support of the large Chilean and foreign Press Media, controlled by the large corporations, campaigned against deep and substantial changes in Chile from the beginning.

According to the newspaper La Tercera, the Rejection campaign had 200 times more funding than the Approval campaign. The big media and propaganda played a very important role in the results that we know based on a campaign of fear based on lies and distortion of the real content that was proposed in the New Constitution.

Although the Rejection option prevailed, the path is not entirely closed for Chile to have a new Constitution that governs its destiny in the future. In the coming weeks, Congress must determine a law for the creation of a new Constitutional Convention. The members who are elected must prepare a new Constitution proposal which will very possibly go to a plebiscite in 2023. The social movements must continue working to achieve true democracy and for the consecration of human rights in a new Constitution for Chile.

– Pablo Ruiz is part of the Observatory for the Closure of the School of the Americas in Chile, and a close contact of the International Peace Bureau in Latin America.