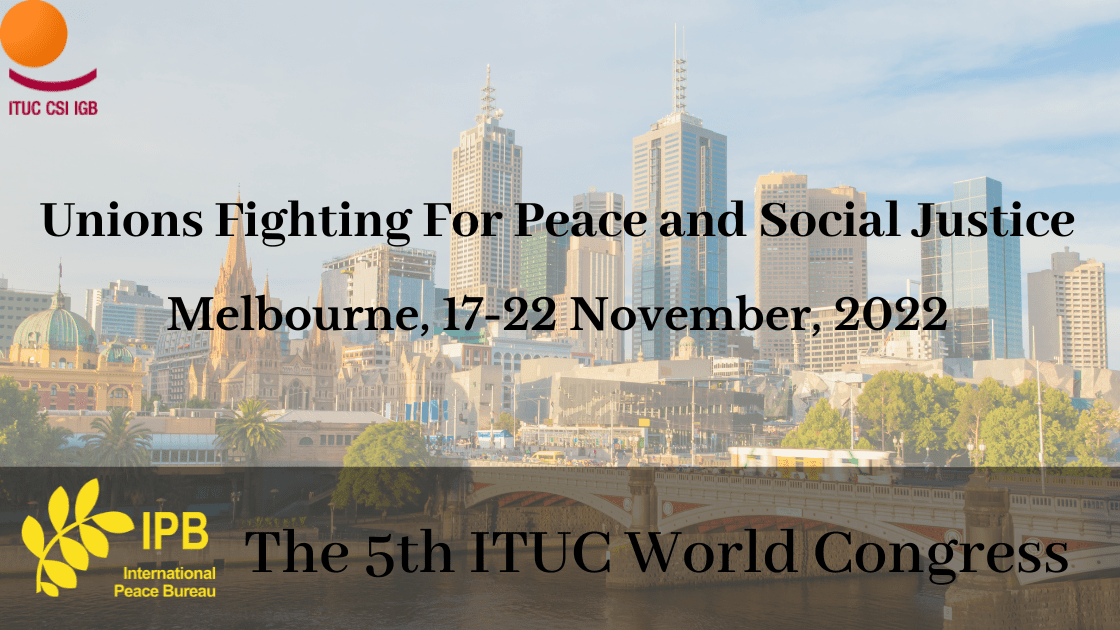 The 5th ITUC World Congress in Australia has celebrated the role of trade unions in peace-building, without which there can be no social justice.
Presenting the Freedom Report 2022: Unions Building Peace to the delegates, ITUC General Secretary Sharan Burrow said: “Some two billion people live in conflict-affected countries, with 56 state-based conflicts in the world today.

“International humanitarian trade union solidarity, such as the major efforts to support workers in Ukraine, Myanmar and elsewhere, is part of a broader framework of trade union efforts to build and sustain peace and to avoid conflicts and rebuild in their aftermath. The world must learn from this example.

“If world leaders can come together to look at addressing the threats from climate change, then it should also invest in global dialogue on measures to prevent conflict, to end existing conflicts and to rebuild in the aftermath of war in a just and sustainable way.

“There are many examples of trade union action for peace, justice and democracy. We take pride in these achievements and the inspiration we draw from them will help unions everywhere plan and campaign for fundamental freedoms, democracy and peace.”

The report includes case studies from:
• In Colombia, unions have been at the forefront of decades of struggle for peace and social justice.
• In Northern Ireland, the trade union movement has long been a motor for peace and overcoming division and sectarianism.
• In Myanmar, the unions continue their longstanding peace and democracy struggle in the most difficult and dangerous circumstances under a ruthless military dictatorship.
• In Tunisia, the UGTT and others were awarded the Nobel Peace Prize for their work to build a post-dictatorship country with a new constitution. A commitment that remains just as strong as the country faces new challenges.