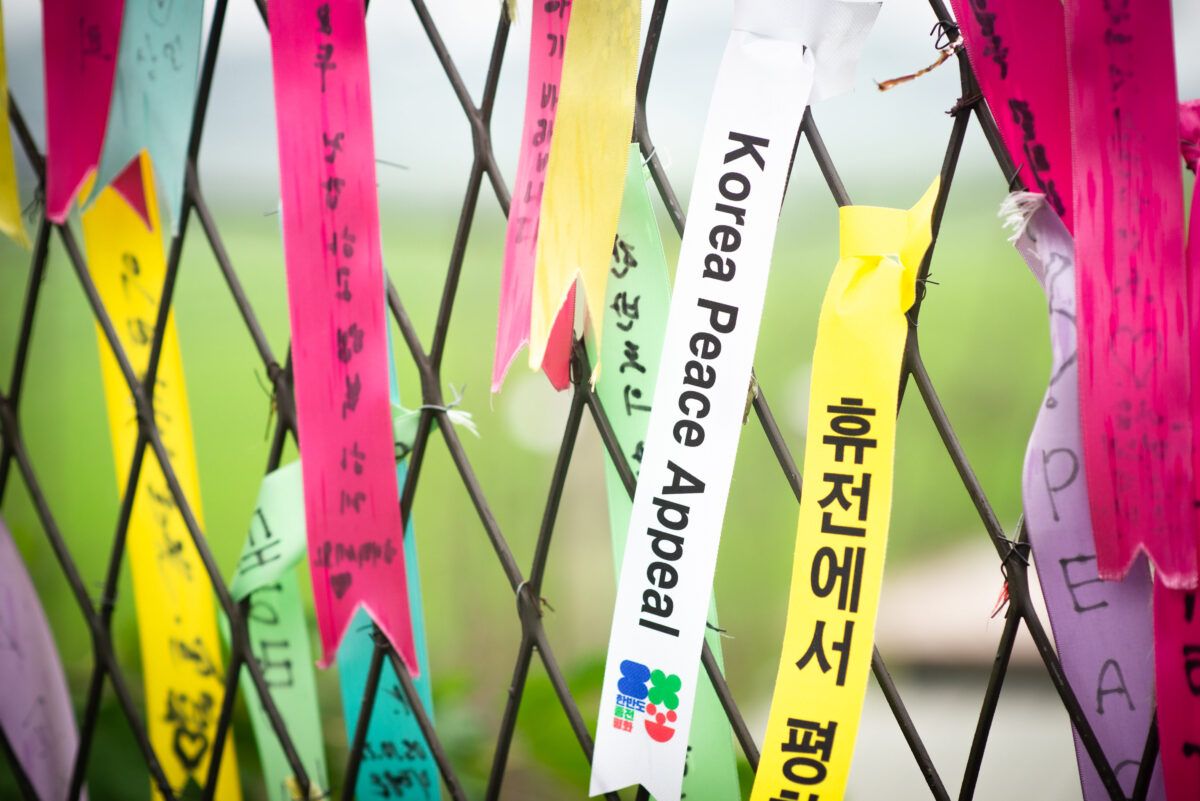 Not long ago, there was an accident in which a South Korean missile fell into a military unit in Gangneung, a city in the east of South Korea. The missile fired by the South Korean military in response to North Korea’s ballistic missile launch was mistakenly dropped during an abnormal flight. The explosion and fire left residents in a state of anxiety all night. As North Korea’s missile crossed the South Korea’s NLL(Northern Limit Line) and fell into the open sea, an air raid warning was issued for the first time on Ulleungdo, a small island in the east sea. Many military experts said the missile was likely a “fault.” Residents living in Gunsan, where USFK air base is located, continuously say, “It’s too loud to live here.” Because a large-scale ROK-US combined air force exercise ‘Vigilant Storm’ was conducted last november. It was a military exercise mobilizing 250 aircrafts including F-35A fighter jets of South Korean army and USFK, and F-35B fighter jets of USFJ to strike hundreds of strategic locations in North Korea simultaneously.

Year 2022, Crisis on the Korean Peninsula

The crisis on the Korean Peninsula is so serious enough to cause armed conflicts at any time. Everyone is worried that there will be an accidental armed conflict when inter-Korean dialogue has been halted. One of the largest military drills, the ROK-US combined military exercise, is being conducted frequently in the small peninsula. These exercises involve utilizing both nuclear and non-nuclear forces. North Korea’s response to South Korea and US military action is also getting tougher. North Korea has pushed ahead with the most missile tests ever this year, including ICBMs.

Even more dangerous is the fact that South Korea, the US, and North Korea are announcing and practicing a ‘preemptive strike’ strategy against their opponents. South Korea and the US are practicing operational plans, including preemptive strikes and leadership beheading, and are frequently deploying fighter jets capable of dropping nuclear weapons on the Korean Peninsula under the name of ‘extended deterrence.’ In response, North Korea has also announced the Law on the DPRK’s Nuclear Forces Policy, that said it could preemptively use nuclear weapons if an attack is deemed imminent or if the leadership is threatened. The vicious cycle of arms race is repeating.

It is contradictory for both South Korea, North Korea, and the US to be so preoccupied with war exercises that they want no war to break out. South Korea Yoon Suk-yeol administration’s policy toward North Korea is based on an old idea that “we will make economic compensation if North Korea gives up its nuclear weapons.” It is also strengthening its aggressive military posture, insisting on ‘peace through strength.’ Beyond the ROK-US military alliance, the ROK-US-Japan military cooperation is being promoted at a rapid pace, and cooperation with NATO is also being strengthened. It is hard to find an independent strategy and realistic solution for peace in the current administration. As a result, South Korean government has not had any significant contact or dialogue with North Korea so far.

In 2018, the Korean Peninsula showed hope for peace to the world. But now, military tensions are rising without an exit. Since North Korea announced a moratorium on nuclear and ICBM tests in 2018, South Korea and the US have not taken appropriate countermeasures to improve hostile relations and resolve security threats felt by North Korea. This is one of the reasons for the loss of momentum in negotiations, and why North Korea cannot be blamed solely for the current situation.

Northeast Asia, the Front Line of the US-China Conflict

Recently, a series of diplomatic events such as the US-China summit, the G20 summit, the ROK-US-Japan summit were held. But it is still difficult to find peace, cooperation, or a bright future. It is a good thing that the leaders of the US and China announced that there would be no ‘New Cold War’ and decided to resume climate change negotiations. But it’s not enough. The world’s blocization and militarism are getting worse day by day. In particular, the strategic competition between the world’s top military expenditure (US) and second (China) is taking place in all areas, and is expected to continue to be.

As the confrontation between the US and China intensifies, conflicts and tensions are occurring throughout Northeast Asia, including the Korean Peninsula, the East China Sea, the South China Sea, and Taiwan. Any accidental armed conflict in these areas would have disastrous consequences. The confrontation between the ROK-US-Japan and the DPRK-China-Russia are gradually increasing around the Korean Peninsula. The Korean Peninsula, which had not escaped the Cold War structure even during the post-Cold War period, is now in the midst of an unpredictable vortex called the ‘New Cold War.’

We do not have much time. From now on, we cannot guarantee that even the unstable cease-fire on the Korean peninsula that has lasted for the past 70 years will remain in place. We must urge each government and the international community to act as follows to ensure a peaceful resolution of the conflict on the Korean Peninsula and to prevent armed conflicts in Northeast Asia.

First, the countries concerned must immediately stop all military action that intensifies military tensions on the Korean Peninsula. They must recognize that armed protests only intensify the vicious circle and can never be a solution. In particular, South Korea and the US need to take preemptive measures to reduce threats, such as suspending combined military exercises. It is urgent to restore trust and create conditions for the dialogue to resume. We need to find extraordinary ways, such as appointment of special envoys to North Korea. The US has the strongest military power in the world, and South Korea spends more than 1.5 times the total GDP of North Korea on military spending alone. South Korea and the US, which have an overwhelming advantage in economic and military power over North Korea, should act first. If anyone doesn’t change, we can’t expect change.

Second, it is necessary to reassess the purpose and effectiveness of the UN Security Council sanctions on the DPRK. The policy to make North Korea give up its nuclear weapons through sanctions and military pressure has failed for the past two decades. As a result, we all witnessed that North Korea’s nuclear capability has grown over time. We should all remember that North Korea’s nuclear and ICBM tests were suspended, at least while talks and negotiations were underway. The international community cannot solve problems simply by demonizing the DPRK and imposing sanctions and pressure. UN Security Council resolutions on the DPRK emphasize not only sanctions but also peaceful and comprehensive solutions through dialogue. Comprehensive sanctions against North Korea have been ineffective in resolving the nuclear conflict, but only have worsened the humanitarian situation of North Koreans. Sanctions are not an end but a means. Sanctions on North Korea should be eased to improve the humanitarian situation and promote inter-Korean cooperation and peace negotiations.

Fourth, international efforts are needed to prevent armed conflicts in Northeast Asia and disarmament. Tensions are rising throughout Northeast Asia, and some regions are at high risk of leading to armed conflict. We need to resolve conflicts peacefully through dialogue and preventive diplomacy. Especially, regular dialogue and mechanisms should be created to control the deepening arms race between the US and China, including modernizing nuclear weapons, missile defense, autonomous weapon systems, militarizing space, and so on. Northeast Asia is an area where regional approaches have not developed and there is no regional security cooperation system. It should be noted that national security is deeply interdependent with other nations. As an alternative to resolving the deepening bilateral conflict, efforts are needed for regional security cooperation and dialogue. In addition, cooperation on the common goal of combating climate change must also continue regardless of the political and military situation. Because there is no peace without climate justice, and there is no climate justice without peace.

South Korea’s nationwide civil society organizations, seven major religious orders, and international organizations have been conducting the global signature campaign of the Korea Peace Appeal calling for an end to the Korean War and peace agreement since 2020. It is to end the vicious cycle of arms race on the Korean Peninsula, create a world without nuclear weapons and establish peace through dialogue and cooperation.

Year 2023 marks the 70th anniversary of the Korean War Armistice Agreement. Next year, Korea Peace Appeal Campaign plans to extend our campaign in various ways. Ahead of the signing date of the Armistice Agreement on July 27, the Global Action for Korea Peace in 100 different cities around the world, large scale rallies and marches in Seoul, and international conferences will be held in July. Detailed ways to participate will be updated to everyone next year. I hope that you and peace folks around the world will join with us to bring peace on the Korean Peninsula.

The world we are facing now may not be the ‘Post War’ but the ‘Pre War’ era. The word ‘war’ feels closer than ever. We must continue to call for peace, disarmament, and cooperation against militarism and blocization. The higher the risk of war and armed conflict, the more people will want peace. The role of the peace movement is to connect and amplify the voices of such people as one, and to tell the world that “peace is possible.”

For the 70th anniversary of the armistice of the Korean War, let’s go together for peace on the Korean Peninsula and Northeast Asia, and for world peace.