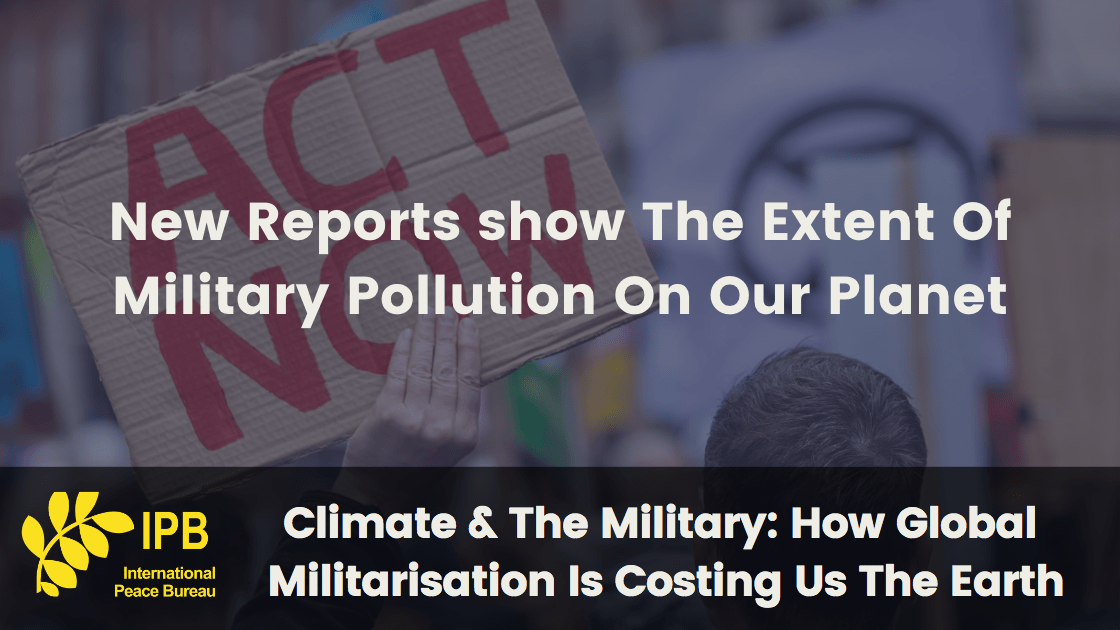 New Reports Show the Extent of Military Pollution on our Planet

Recent data from reports published by Scientists for Global Responsibility (SGR)and the Conflict and Environment Observatory (CEOBS), as well as from the Transnational Institute (TNI), Stop Wapenhandel, and Tipping Point North South (TPNS) demonstrate the overwhelmingly negative impact of global military activities on our climate.

The 2022 SGR report estimates that the world’s militaries contribute to 5.5 per cent of global greenhouse gas  (GHG) emissions. It also finds that if the world’s militaries were a country, it would have the 4th largest national carbon footprint in the world. To illustrate these findings further, if global militaries were combined they would be the world’s 29th top oil consumer, ahead of Venezuela and Poland.  SGR and CEOBS estimate the annual military carbon footprint of the US at 205 million tonnes, and 11 million tonnes for the UK.

Despite the new methodology that has enabled scientists to approximate the level of military carbon pollution, their estimations are limited. A lack of clear and consistent reporting of data by governments has made it difficult to provide accurate estimations of military greenhouse gas emissions – under the 1997 Kyoto Protocol, governments are not obligated to report their emissions data to the United Nations Framework Convention on Climate Change (UNFCC). Further, collaborative research by between CEOBS and Concrete Impacts: militaryemissions.org shows no yearly improvements on voluntary reporting by governments. It is also difficult for researchers to measure emissions from damage to buildings, eco-systems and reconstructions efforts post-conflict leading to significant data gaps.

Despite these limitations, the existing data is alarming and highlights the need for dialogue between governments, international organisations and civil society to work towards a global plan. Civil society can play a crucial role in advocating for the redirection of finance from the military towards funding climate change. The richest countries (annex II in the UN Climate Talks) have a military expenditure 30 times greater than what they allocate to climate finance for vulnerable countries and have failed to meet their obligation of providing $100bn a year to the most climate-vulnerable countries in the world. The redistribution of just one year’s military spending by the top 10 military countries towards climate finance would provide 15 years  (US $100bn) of the promised funding.

Moreover, a thorough set of data protocols should be put in place to enhance transparency and pave the way for more comprehensive and accurate data on global military emissions, as suggested by SGR. We must demand greater transparency and accountability from governments, and promote the dissemination of information about military emissions to increase public attention on governments’ military spending and activities.  Collective action in the peace and climate movements  is necessary to bring about a  reduction of military carbon emissions, and the redirection of spending in this sector towards mitigative action for our climate.

The best way to reduce military pollution on our planet is to reduce war. The International Peace Bureau is committed to promoting positive peace and justice, below we outline several recent actions that IPB has taken: 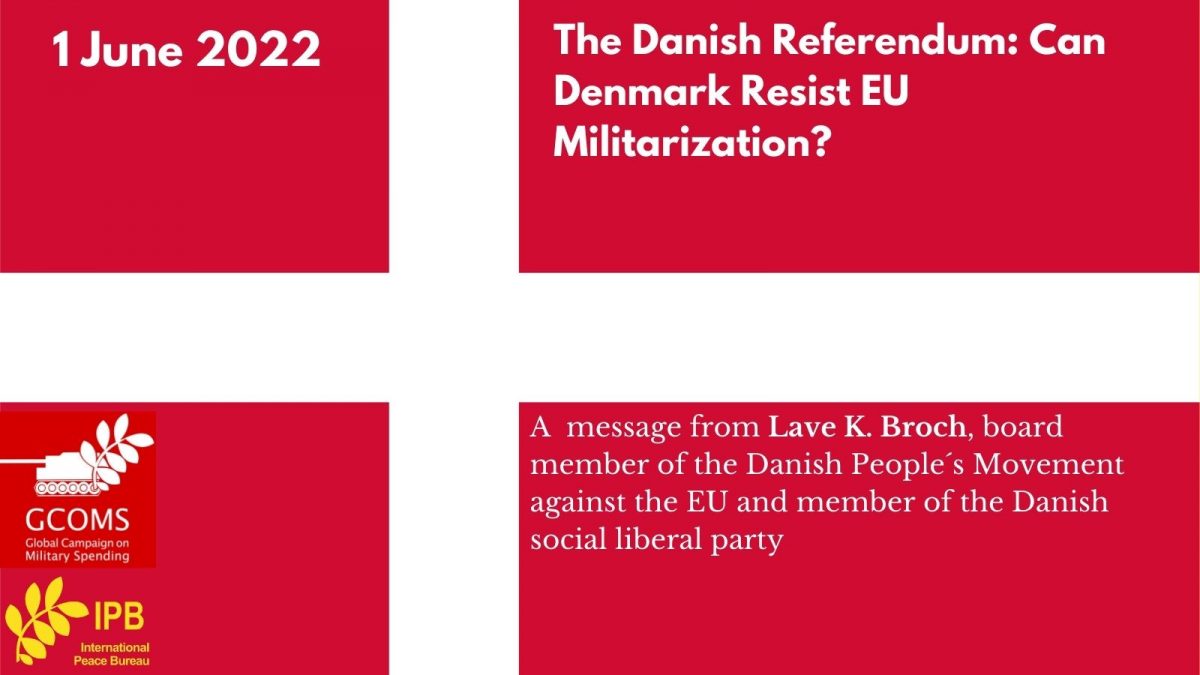 On June 1, Denmark will hold a referendum on the abolition of the defense opt-out, which is one of the country’s opt-outs from the European Union. Currently, Denmark is the only EU country with such an opt-out option. EU militarization has increased tremendously – European arms are sold all over the world with very few restrictions. Arms trade is a threat to peace, security and development, and the arms industry is a driving force behind increasing military exports and expenditure.

Listen to a message from Lave K. Broche (Board member of the Danish People’s Movement  against the EU, active in the Danish UN Association and member of Danish social liberal party) on our Youtube channel:

From his perspective, three points are crucial:

2.       Danish visions for peace negotiations – if Denmark keeps the power over their defense and security policy and votes no, the country will have more possibilities to be a negotiator for peace.

3.       Denmark should support international law, an area that is deeply rooted in society – this means no wars or out of area operations without an UN mandate.

If you are interested in this topic and convinced that Denmark should say no to EU militarization on June 1 , please use your voice and support the Danish population on making their decision! Here is a link to their support page: https://www.folkebevaegelsen.dk/support-us/

Would like to read more? Here is an article about Thales that sold weapons to Russia and that gets money from the EU: https://stopwapenhandel.org/killed-by-thales-military-technology-in-bucha/

or an article by Lave K. Broch about the legal aspects: https://thepeoplesnews.home.blog/2022/05/20/the-danish-referendum-is-about-sovereignty-in-defense-policy-vote-no/