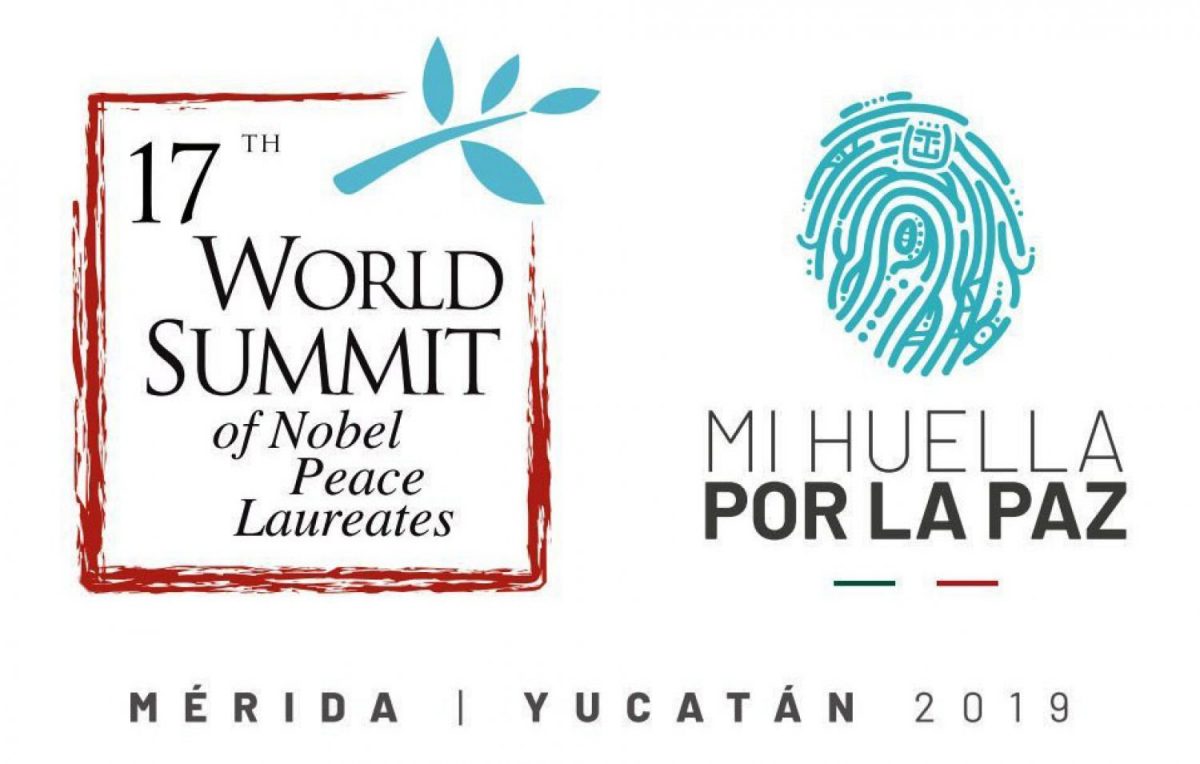 The World Summit of Nobel Peace Laureates established in 1999 is one of the most relevant and renowned events related to the peace dialogue around the world, and this year it celebrates its 20th anniversary since its inception.

The outcome of the Summit was a Declaration to make an urgent call to all countries and organizations of the world, their leaders and citizens, to build a CULTURE OF PEACE.

The undersigned, gathered in Mérida, Mexico, at the 17th World Summit of Nobel Peace Laureates declared:

1- Peace is the right of all human beings. It is the supreme good of humanity because without it there is no true development or possible coexistence.

2- Building a Culture of Peace rests on the belief that we must treat others as we wish to be treated. This ethical principle applies at all levels of human endeavor – personal, family, community, and national. When honored, dignity and stability follow. When violated, instability results.

3- In the midst of the current challenges of war, fear, racism, intolerance, and populist nationalism, today more than ever it is necessary to promote a Culture of Peace that follows tolerance and respect for diversity as a fundamental principle of coexistence among human beings and nations.

4- A Culture of Peace is essential for the integral development of individuals and their families, for the progress of societies and the survival of humanity.

5- A Culture of Peace expresses unconditional respect for human life and human rights. Human rights are the foundation upon which humanity can live in harmony.

6- A Culture of Peace requires respect for all other life, and for the systems that support all life on earth, as a prerequisite for the healthy development of human society. A Culture of Peace includes being at peace with oneself, others and the natural world.

7- The primary tool to promote a Culture of Peace is Peace Education, which must be taught in families, all levels of education, workplaces, and disseminated through the media, and encouraged at all levels of society.

8- First, we are human beings. Our common humanity precedes gender, race, religion, nation, sexual orientation, and political affiliation. Our humanity is enriched by its diversity.

9- We support and are inspired by the resolutions and institutions of the United Nations such as the Culture of Peace Program developed by UNESCO and in a broader sense the Sustainable Development Goals.

10- There is no greater gift we can give our nations and communities than peace. Our children and generations to come deserve this gift. Let’s make the Culture of Peace our legacy!

DECLARATION OF THE XVIITH SUMMIT OF NOBEL PEACE LAUREATES

MAKE YOUR MARK FOR PEACE

We commend the progress that the State of Yucatán has made in implementing the United Nations Sustainable Development Goals and encourage the promotion of a just society for all.

We recognise and commemorate the Mexican Nobel Peace Laureate, Ambassador Alfonso Garcia Robles, for his role in the adoption of the Treaty of Tlatelolco, and in the initiation of the concept of nuclear weapons-free zones.

We also wish to congratulate the Permanent Secretariat of the World Summit of Nobel Peace Laureates on its 20th anniversary.  We thank it for organising this XVIIth Summit and acknowledge its contribution over the past two decades in providing a global platform for Nobel Peace Laureates to express their views on continuing threats to peace and in sharing their experiences in peace-making with the coming generation.

We have been immensely enriched by the presence of more than 1 000 young people at the Summit and by our interaction with them on the issues that will mould the world that they will inherit.   Ultimately, their lives will be deeply affected by our common success or failure in addressing the climate crisis; in controlling nuclear weapons and in building a world based on a culture of peace, human rights and social justice.

At the conclusion of our meeting – and after in-depth consideration of the threats to peace, social progress and our environment – we have adopted the following Declaration:

We need a renewed understanding of the concept of peace.  After the devastation of two world wars and a series of ideological, religious and civil wars, the relative absence of war has been mistaken as the achievement of peace. For as long as basic freedoms are violated and gross corruption, violence, extreme poverty, inequality, racism, modern-day slavery and trafficking of persons, discrimination, and discrimination phobias exist, there can be no true peace.  We proclaim that true peace is inseparable from the achievement of true justice.

We are deeply concerned about current threats to peace, social justice and global sustainability for the world and for future generations.  Every human being should understand how we are all interconnected – not only with one another, but with all life on our beautiful planet.  Any threat to the wellbeing of any of us – or to our environment – affects us all.

We accordingly call on every single person to leave their mark for peace in the world that we all share.

We call on all citizens to participate in building a more just, a more peaceful and a more sustainable world by working for the Goals in the Universal Declaration of Human Rights, the United Nations Declaration on the Rights of Indigenous People, and the UN 2030 Agenda for Sustainable Development.

The Summit is deeply concerned about the threat posed to humanity by the climate and environmental crisis.  We have heard the worldwide call of young people on 20 September for concerted action by governments to take real and overdue action to combat global warming and to reduce carbon emissions.

During the Summit we have addressed seven topics affecting the peace, wellbeing and sustainability of humankind. At the conclusion of our deliberations, we make this CALL TO ACTION:

The world’s 6 000 Indigenous peoples, who make an essential contribution to the diversity and  richness of humanity’s cultural heritage, face the threat of being overwhelmed by commercial, global and national cultures.

Everywhere people are on the move. They are leaving their normal places of residence because of war, climate change, social violence and poverty arising from the lack of economic and employment opportunities.

We live in an age of immediate mass communication in which there has been an exponential increase in our ability to disseminate news instantly throughout the world.  The geometric expansion of social media has brought the power of global communication to the fingertips of everyone with access to the internet.  This power creates new responsibilities – particularly within the context of the threat that social media poses to traditional global media; the manipulation of social media for illegitimate economic and political purposes and the growing dissemination of “fake news”.

We are deeply concerned that 74 years after the nuclear bombings of Hiroshima and Nagasaki nuclear weapons continue to pose an existential threat to humankind.  As Nobel Peace Laureates we have repeatedly warned of the catastrophic consequences of nuclear war and are compelled to do so once again.

However, threats to international peace do not come only from nuclear weapons.  We are extremely concerned about escalating expenditure on conventional arms and the development of new and deadly weapons systems.

We have taken note of the letter we have received from President Mikhail Gorbachev and fully support his call to “all leaders of nuclear-weapon powers to reaffirm without delay the proposition that a nuclear war cannot be won and must never be fought” and to “return to the negotiating table to agree on reducing and eliminating the nuclear arsenals”.

The rule of law is indispensable for the ordering of social, political and economic relations and it is the foundation of all human rights.  The force of law at the global level provides the framework for international peace and stability.  Within nations it is the foundation for human rights, social cohesion and freedom – while its absence is the source of most of the violations of human rights, social division and oppression.

The Summit was attended by 10 Nobel Peace laureates:

However, they do not all necessarily support all aspects of the general consensus that emerged from the Summit’s deliberations.