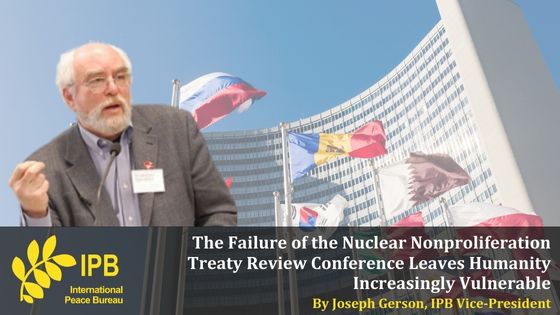 The failure of the Nuclear Nonproliferation Treaty Review Conference to adopt a final conference statement adopting specific goals and deadlines for further disarmament weakens humanity’s ability to defend itself against the existential and increased danger of nuclear war. (The conference was held at the United Nations in New York, August 2-26)

Given the history of the initial nuclear weapons states in their resistance to fulfilling  their  Treaty obligations, including their Article VI commitment to engage in good faith negotiations for complete nuclear disarmament, the failure of the conference came as no surprise. Even before the fate of the conference was sealed by Russia’s veto of the draft final statement, it had been so watered down as to be almost meaningless. Reflecting the new Cold War environment that has been crystallized by Russia’s illegal and brutal invasion, the conference began inauspiciously with the United States, Britain and France, each of which have prepared and/or threated to initiate nuclear attacks during wars and crisis, shamelessly pressing to distinguish between their “responsible” use of nuclear threats for “defensive purposes and Moscow’s “irresponsible” offense nuclear threats in the Ukraine War.

There was actually some unity among the nuclear powers. Unfortunately, it was in their unified opposition to a draft text that expressed “deep concern at the absence of tangible progress in further reductions in global stockpiles and in the implementation of disarmament commitments by the nuclear weapons states since the 2015 Review Conference”.

If there was anything to celebrate, it was the reaffirmation – as reflected in working drafts for a unified statement –  by  the vast majority of the world’s nations to the NPT as the “cornerstone” of global nuclear nonproliferation and disarmament diplomacy, pressure on the nuclear weapons states to adopt No First Use Doctrines, and the thin tread of hope in U.S. and Russian pledges, despite the Ukraine War, to engage in future negotiations for renewal of the New START Treaty. There was, however, no agreement on when and where such negotiations would begin.

The Treaty, negotiated in 1968, has been described as the world’s “cornerstone” for nuclear disarmament diplomacy. But for more than five decades the permanent members of the Security Council – all nuclear powers –  have refused to fulfill their Article Vi NPT obligation to engage in good faith negotiations for the elimination of their nuclear arsenals. Even before Russia’s illegal and brutal invasion of Ukraine, with the collapse of the Cold War and Post-Cold War arms control architecture,  the nine nuclear weapons states were engaged in increasingly dangerous and unrestrained nuclear arms races, leading the Bulletin of the Atomic Scientists to warn that humanity is 100 seconds from Doomsday, apocalypse.

In the end, the adoption of a severely watered down compromise text was sacrificed on the altar of the Ukraine War, specifically  if and how to address the dangers implicit in Russia’s seizure of the  Zaporizhzya nuclear power plant in Ukraine and the fighting in its precincts which threaten Ukraine and the northern hemisphere with a nuclear accident similar to, or worse than, the Chernobyl nuclear meltdown.

The efforts of the states parties to the Treaty on Prohibition of Nuclear Weapons to secure a meaningful NPT Review final statement were commendable, especially follow the TPNW’s first meeting of states parties in Vienna which reaffirmed that the TPNW is designed to reinforce the NPT. The failure of the NPT Review Conference reflects that the TPNW states need to acquire still more international support and ratifications if they are to have the necessary leverage needed to influence the policies and politics of the governments which hold humanity hostage to secure the power and privileges of their elites.

Similarly, to reduce the risk of nuclear war and to win meaningful nuclear disarmament, the world’s nuclear disarmament movements urgently need to develop methods to mobilize the  massive popular support without which humanity will continue to hurtle toward nuclear Armageddon.