On the 12th of March 2019, the International Peace Bureau (IPB) held a press conference on the premises of its Berlin Office. The aim of the event was to present to the German press the various events and demonstrations being organised to mark the 70th anniversary of the North Atlantic Alliance (NATO), which will happen on the 4th of April 2019.

END_OF_DOCUMENT_TOKEN_TO_BE_REPLACED

On the 3rd of February 2019, the highly esteemed peace activist Elisabeth (Betty) Chapman passed away in her home, in the Norwegian town of Re, at the age of 91.

END_OF_DOCUMENT_TOKEN_TO_BE_REPLACED 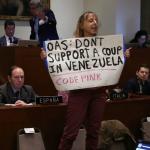 “Today’s summit between President Trump and Chairman Kim Jong-un is a very positive development. At a time of escalating militarisation and increasingly dangerous policy developments – the US’s new nuclear posture review and recent strategic defence review to name but two – an outbreak of dialogue in an exceptionally tense region is a welcome step.

“Some take the view that the summit statement says nothing new, but the key is that the summit took place. Just months ago we were looking at the possibility of nuclear war. Today the world has pulled back from the brink. Only cynics would think that a negligible achievement.

“The statement itself crucially recognises both sides’ primary concerns. Trump has committed to providing security guarantees to Pyongyang, and Kim Jong-un has reaffirmed his commitment to denuclearization of the Korean Peninsula. Beyond the formal texts, subsequent remarks may help to make the good intentions real: Trump says he will halt his provocative ‘war games’ – exercises that include flying nuclear capable bombers close to North Korea’s border. And Kim says North Korea will destroy nuclear test centres, so both sides are contributing to denuclearisation.

“These are small steps but much to be welcomed as the peninsula moves towards bringing a formal end to the Korean war and embracing more peaceful future”.

We would like to kindly invite you to our Ceremony, where IPB will award the Séan MacBride Peace Prize to Jeremy Corbyn.

The Ceremony is organized in cooperation with the World Democratic Forum.

For his sustained and powerful political work for disarmament and peace. As an active member, vice-chair and now vice-president of the Campaign for Nuclear Disarmament in the UK he has for many years worked to further the political message of nuclear disarmament. As the past chair of the Stop the War Campaign in the UK he has worked for peace and alternatives to war. As an MP in the UK he has, for 34 years taken that work for justice, peace and disarmament to the political arena both in and outside of Parliament. He has ceaselessly stood by the principles, which he has held for so long, to ensure true security and well-being for all – for his constituents, for the citizens of the UK and for the people of the world. Now, as leader of the Labour Party and Leader of the Opposition he continues to carry his personal principles into his political life – stating openly that he could not press the nuclear button and arguing strongly for a re-orientation of priorities – to cut military spending and spend instead on health, welfare and education.

Read the impressions from Alimzhan Akhmetov (Director of the Center for International Security and Policy, Kazakhstan) of the second negotiation round on a nuclear weapons ban treaty.

We should give nuclear powers their due. They conducted a targeted work to reduce the number of States participating in the second session of the Conference to prohibit nuclear weapons, which started on June 15 in New York and will last three weeks, until July 7. […] Read the whole article here.

June 20 this year in New York a major discussion of the States parties to the Conference on the Prohibition of Nuclear Weapons, like the close attention of civil society, was brought about by Article 6 of the draft Convention. […] Read the whole article here.

Dance around the “transit“

During the negotiations on the draft Convention on the prohibition of nuclear weapons, an interesting discussion of the States unfolded around the provision prohibiting the transit of nuclear weapons. […] Read the whole article here.

A month passed, as the President of the Conference to negotiate a legally binding instrument to prohibit nuclear weapons, leading towards their total elimination, the Costa Rican Ambassador Elaine White presented the draft Convention on the prohibition of nuclear weapons […] Read the whole article here.