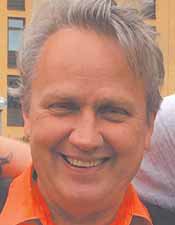 Tord Björk was elected as IPB council member in October 2022. He is currently Coordinator of the FoE Sweden EU committee and member of the peace committee and the farmer and indigenous committee.

Tord has been active inte the environmental, peace and solidarity movement at international, national and local level since 1971. This includes protesting against ecocide in Vietnam and organizing other alternative activities during the first UN Cionference on Envirionment in 1972, becoming active in the local Swedish Peace and Arbritation Society in Nacka 1974 and the local conservation society as well as becoming one of the founders of the anti nuclear power movement in Stockholm the same year, in 1977 founder of Peoples campaign against Atomic power which later changed name into Peoples campaign against nuclear power and nuclear weapons (Folkkampanjen mot kärnkraft-kärnvapen).

Since 1981 he has been elected in different national positions as member of the board and in different committtes in Environmnetal federation. Since 2010 Tord has been organizing conferences on agriculture and forestry together with small farmers, Friends of the the Earth Sweden and solidarity groups.